This summer we focused our cruise of Newfoundland on Placentia Bay, a huge bay with numerous islands and multiple very snug anchorages, all of which sheltered bustling fishing communities at one time.

We visited eight isolated communities that were resettled in the 1960s, were used as fishing stations in the 1980s and 1990s—until the crash in the cod stocks and the resultant moratorium on cod fishing in 1992—and then carried on as summer homes for some of those who had lived there, even if only for a few years, before resettlement.

Sadly, six of these eight communities are now dying. The generation who were born there, who kept up their places for use as summer cabins, are getting older and no longer coming, and the next generation doesn’t have any interest in visiting—their lives are based elsewhere.

However, two communities we visited are happy exceptions to the above: Merasheen and Great Paradise have somehow managed to stay active as summer communities despite the aging of the original inhabitants and the loss of the cod fishery.

So what makes the difference? Why are these two places thriving and the others aren’t?

Bill—who was born there—thinks that the Merasheen reunions, held every five years, and the garden parties, held every other year, keep the connection to Merasheen alive across generations. Pat—also born at Merasheen—says that, interestingly, it’s not the kids but the grandkids of the original residents who have a rekindled interest in the place.

Bill’s wife, Barb, told us that he was the driving force behind the first reunion that took place in 1980—only 13 years after resettlement—which attracted 700 attendees. Though he is no longer involved in organizing the reunions, if it hadn’t been for his initiative, Merasheen might very well have been one more casualty of disinterest. As is so often the case, it took just one person with a vision to make a big difference.

This is something we saw in Norway, as well, where the small coastal communities that were surviving the trend towards urbanization were doing so because of the initiative of a small number of people, whether it was by building a salmon farming industry in Lovund or directing a men’s choir in Berlevåg.

Great Paradise, on the other hand, is thriving for a very specific reason, which is its close proximity to South East Bight, an active year-round outport (i.e. non-road-served community) just three miles up Paradise Sound. Sometimes it only takes one small thing to tip the scales enough to keep a place alive.

John and Phyllis, thank you for your articles on Newfoundland. As a Newf that has moved away, it is my dream to do some cruising around Nfld. once I hit retirement. Flying over the southern part of the country, I am amazed at all the small protected anchorages that await, not to mention the history. Keep the stories coming and the more detail the better.

Dear Phyllis,
Nice article, nice thoughts.
After 2 seasons in Norway, I agree with your observations. I also heard, when discussing this very issue with people we met, that the government is actively interested and supportive of its past and present. Not so much in a welfare kind of way, but in a sustaining lifestyle manner. One example: they have rigorously regulated the fishing industry and have for a long time. (One of the reasons they did not join the EU was because they wished to manage their waters without interference: and thereby they do not have the disastrous end results of the EU’s fishing policies.) The result is a still very viable fish industry. Norway was the only country we have visited whose fishermen were largely contented and working their industry.
More locally, and to support your arguments, those of you who have enjoyed the Raw Bar boat (it has been 15 years, but I assume it is still going) that comes around in the evening in Cuttyhunk (a perfectly delightful island off Massachusetts), may be interested that this was started by a summer resident as an adjunct to his local oyster fields, another entrepreneurial adventure. Both endeavors contribute to Cuttyhunk’s vitality and to the employment of young people on the island. Both make it a far more “interesting” place than a dedicated summer community.
Lastly, we, as cruisers, can make sure we spend locally when we can. We just went out of our way to buy our new Refleks heater at a local chandlery in a quite small community, Spaarndam, The Netherlands. We did this not to be some kind of do-gooders, but because one often finds the best service and advice from small places that develop expertise over time and experience. This very much proved to be the case for us and that we accomplished this in delightful small town a bit off the beaten track was a bonus.
Keeping one’s eyes open can find many pleasant alternatives to West Marine that will often work out better project-wise and certainly be vastly more satisfying.
My best to all, Dick Stevenson, s/v Alchemy

John and Phylis
Thankyou for the wonderful article highlinghting Newfoundland – my home.
Resettlement. Please allow me to put it in perspective. There must be more then 100 resettled little towns in Newfoundland now still abandoned except for some summer visitors. These outborts stretched for 400 miles from Oderin in southern Newfoundland to Hebron in Northern Labrador. Of all these resettled outports, I don’t know of a single one that has even a single permement resident. Even today with all the modern convienences life would be so much better
Convienences such as running water , electricity, indoor toilets, , Honda Generators, Satelite TV, cell phones,
Plastic piping, ATVs, quality outboard motors and fibreglass boats, immeadiate access to health care, all these things make life easier. But not even a sole Hermit has returned permemently and for good reason, life is better and easier in the more modern communities , it is better now, and it was better back when they resettled.
As pretty as those abandoned harbours are, lets not forget how hard life was back then , and how much easier life is now.
Thanks for your article
Ed Finn
Carbonear, Newfoundland

Good point. Easy to romanticize outport life. Having visited Hebron several times I can’t imagine how brutal life was there before it was closed out, particularly in winter. I seem to remember that some huge percentage of the population (maybe 30%?) tested positive for TB!

On the other hand, I think we must guard against relentless urbanization.

Talking of sole hermits, have you read Sweetland? Now there’s a book to slash your wrists by! Good though.

John,
Nice article.
I am incidentally reading a book by Jared Diamond (UCLA geography professor) titled ‘Collapse-How Societies Choose to Fail or Succeed’ that amongst others addresses the issues mentioned in your article and might be of interest to you.

Excellent tip. I’ve read at least one of his books in the past and found it very interesting and enlightening (Guns, Germs and Steel). I look forward to reading this one.

great start to what promises to be a fascinating series.

There are so many reasons why some communities fail where others thrive in my view, but a few ‘global’ ideas might include resource depletion (fisheries), the low values achieved for agricultural produce (livestock) and the lack of communications (e.g. ferries and internet). And ultimately, whether a centrally based government see remote communities as an asset or a cost burden.

Dick’s right that Norway has laudably looked after its island communities, partly through the use of its oil money, and partly through enlightened fisheries policies to protect smaller fishing vessels that tend to be island based – also whaling, though, which not all agree is a good idea. But all the signs are that the central government wants to keep the island communities alive, in as self-supporting a manner as possible. Whether they will succeed or not remains to be seen, but so far, so good. Good, regular ferry services, communications infrastructure all supported by government help to keep those communities alive.

Contrast this with the Scottish islands where many of them are closer to Oslo than Edinburgh and you’ll be hard pushed to find the similarities, although in fairness there are signs of change with the current SNP administration. It’s always felt to me that the difference lies in the view of the islands at government level, and that successive London based administrations have many years viewed places like Orkney and the Hebrides as costs to be managed into decline and ultimate closure. Author Ian Mitchell wrote an excellent book making the comparison between the islands of Scotland and Norway, ‘Isles of the North’, which I’d recommend for anyone with an interest in this area, and he sailed there to do it!

This is a long way round to saying that local, small communities will always struggle in the face of governmental indifference, and that unless we recognise that such places require nurturing as part of the common wealth they will always struggle. And that includes tangible policies towards the restoration of depleted resources (such as fisheries) for future generations to inherit and subsists from.

Excellent comments everyone. Thank you very much.

John and Phyllis. I’m happy to report that the wharf in Little Merasheen is surviving the winter and ice storms, and looks much as it did during your visit in 2015. Locals continue to make what repairs they can. Photo here from my visit in August, 2021. An occasional new cabin is built and people visit regularly. The community thankfully continues to thrive. 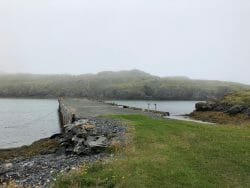 That’s great to hear. Merasheen is one of our favourite stops ever.