Long-time readers know that Phyllis and I are kind of proud of our anchoring gear…OK, down right cocky verging on arrogant. Anyway, here we are with some friends. As you can see, the whole works is being kept in place by our gear.

We get together with this group a couple of times a season and have done this in at least 25-knots of wind, gusting higher, without issues.

Back in November I wrote about what a fan I am of the Vendée Globe round-the-world single-handed race and how I planned to follow the latest edition over the winter.

And what an edition it was. There were too many great moments and stories to detail here, but here are a few that stood out for me and had me on the edge of my seat all winter:

And through it all I marvelled at the always upbeat and often quirky reports from the tail-ender as he raced “The Office”, truly and absolutely alone, far from the other boats (due to a maintenance stop in Tasmania) that would normally hold the only chance of rescue in the remote south Pacific Ocean. All going well, he will finish some time on Friday. Welcome home, Sébastien. 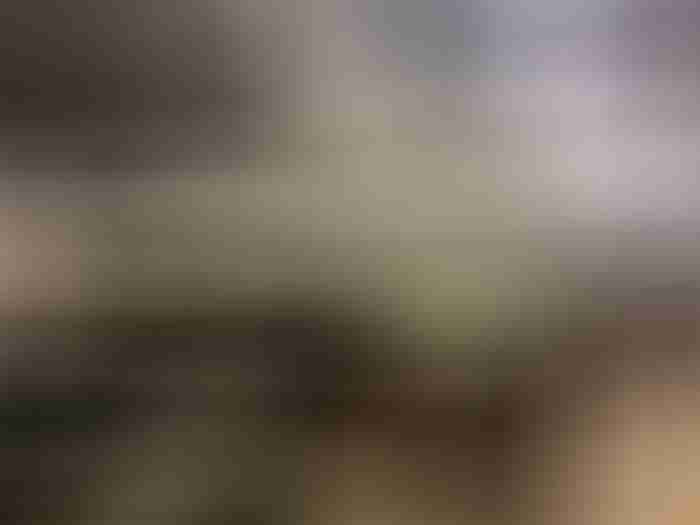 Many of you will remember that last winter we stored in the water here in Nova Scotia. It sorta—more on the sorta in a moment—worked out, but this year Morgan’s Cloud is back in her cozy shed at East River Marine (now East River Shipyard) and frankly I couldn’t be happier.

Now when it storms and snows, instead of lying awake worrying, or even sleeping aboard as I did several times last winter, I smile, give a contented sigh, and go back to sleep.

No, inside storage is not cheap, but over the years we have found that the savings from reduced wear and tear just about pay for the increment…and the skipper is way less neurotic.

Talking of costs, here’s an expensive tale of woe: Last winter, despite my turning of the propeller shaft by hand once a week, some tiny mussels grew in the grooves of the cutless bearing that’s installed in the aft end of the stern tube.

Or at least I think that’s what happened because, when we hauled the boat last fall, we found that said bearing had wound its way a good 6 inches further into the stern tube than it should have been and, in the process, scored the shaft to the point that our local Lloyds surveyor (and engineer) condemned it.

I have a good week of work and at least two boat units in this screw-up already, with much more of both to come in April when I put everything back together.

Given that I turned the shaft regularly, I’m not sure what the solution is, but best be aware.

By the way, we have been stationary in the water for as long or longer many times before without problems, but in those cases the engine was not winterized, so we ran it once a week, including in reverse and forward. Bottomline, hand turning may not be enough in high shell-growth areas. 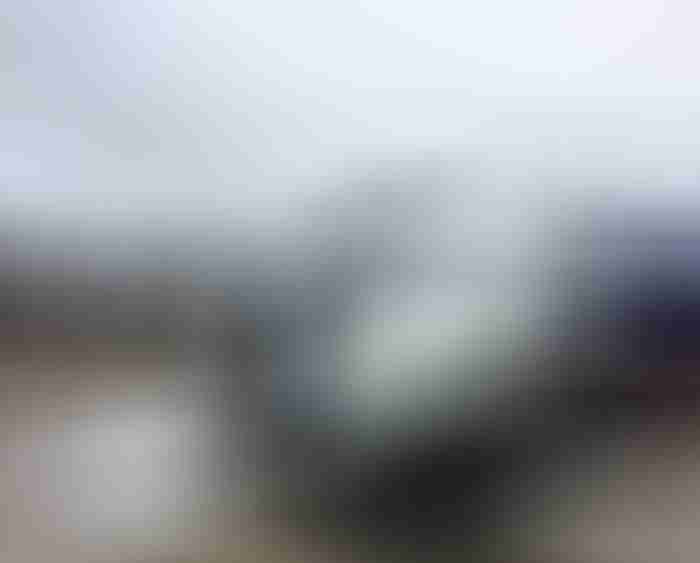 I have warned before about the dangers of winter storage on jackstands with the mast in, particularly in areas like Nova Scotia where the ground heaves due to freeze and thaw cycles. Anyway, the picture above is another sobering reminder.

My recommendation is: Either have a good cradle built or, if you must store on jackstands, take the mast out. 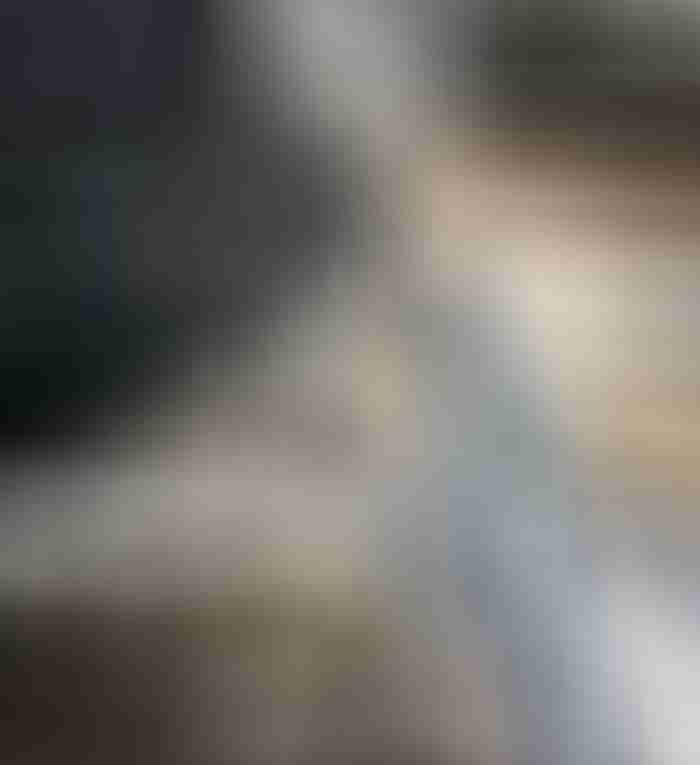 By the way, as I understand it, in this case the owner provided the jackstands, not the yard, and further, he or she made another understandable, but really bad, error by tying the winter cover to the jackstands—I’m guessing the flapping of the cover and associated pulling on the stands was at least part of the cause of this gravity storm.

I will leave you with three photos I took this winter over on the western side of the province:

I just can’t understand why we have such trouble selling Nova Scotia as a winter tourist destination. 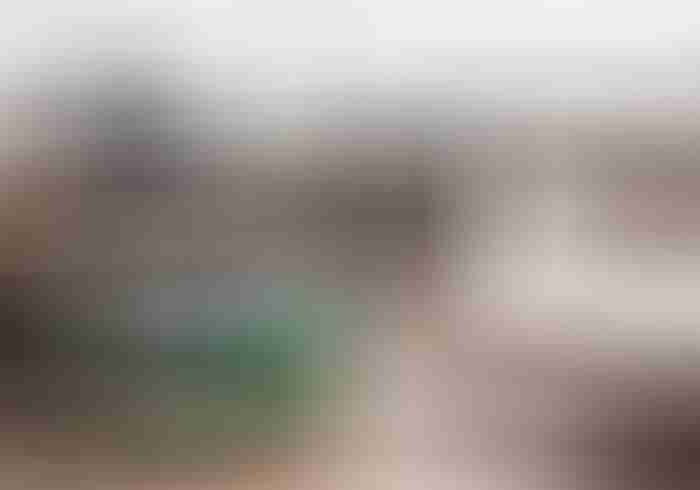 And what a great place for winter yachting…what’s a little missing water between friends?

Talking of missing water, this is one of Nova Scotia’s largest and most successful commercial boatbuilders—they have built some motor yachts too. And they built us a new propeller shaft.

Imagine running a boatyard in a place where the water goes away completely and utterly twice a day. Gives the old phrase “timing is everything” a whole new meaning.

Great mid-winter update! Thanks for sharing.
A real nit-picky comment, but from my eye, it appears the red sloop is also at anchor. Hardly takes away from the impressiveness of the ground tackle, but I figured someone would mention it, so why not me. Best, Conor

I was in that raft up (furthest boat to stbd), know the ground tackle on both John’s and the red boat, and have absolutely no doubt about which was doing 98% of the work! John’s articles about ground tackle have cost me a lot of money for anchor, chain and shackles in the past couple of years, but I don’t begrudge a bit of it.

We are debating “in or out” when we overwinter (as we plan to) in NS before we cross the Atlantic. I’m still researching places to take the bottom back to bare metal and to redo the barrier coat and antifouling in NS. It’s cheaper by far than on the Great Lakes.

Great post, again. I have come to look forward to these every month. The VG was simply unbelievable and that video is, at least for me, just jaw dropping. Great reference to Moses…….do you need to be British to remember Triumphs?

Regards (and looking forward to next month).

Glad you enjoy them. I sure have fun writing them.

I have wet stored Danza in Townsend Gut on the coast of Maine for years without incident. She lays on a heavy mooring in a protected anchorage. I cover her with a ‘clear’ shrink-wrap which keeps the snow off and let’s the sun warm the deck and boat when shining. I often experience 60 degree temps when is is 20 degrees outside. A pair of 75 watt solar panels charges the 24v system and a smaller one charges the 12v system. For us it is a perfect way to winter store Danza.

Yes, it can work, but I think a lot of the secret is how sheltered the place is…that and how neurotic the skipper is.

Thanks for the interesting posts and especially the video of the racing sled making more knots than a kitten with a ball of wool. One question though, is he allowed to have that big wind generator following him across the Southern Ocean?
Love the thought of being able to choose a deckchair without having to remove someone else’s towel first.
Keep them coming.

Yes, here in Nova Scotia in February you remove the other guy’s parka before sitting down.

Love that raft-up picture. I’ve rafted with my friend Dan, me in my Cape Dory 25 on one side, Hanley in his H-28 on the other, Dan in the middle with his 80 feet of chain and Manson anchor. Dan’s the only person I would do that with, and it is because he has spent years of quiet study and observation of anchoring, which has earned him a reputation and a nickname “80 foot Dan.” He’s also known as “Spam and Yams Dan”, that’s another story.