It has been something of a culture shock to be back in Cornwall, where the volume of boat traffic is on a completely different level to the western isles of Scotland. Up there other yachts really are few and far between, whereas sometimes around the Falmouth area we may be altering course for another yacht every ten minutes! 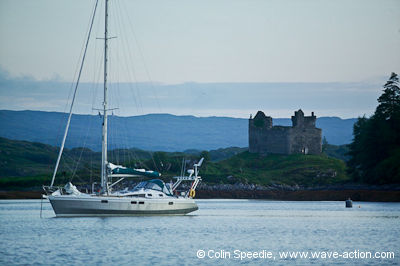 But at least it keeps us on our toes, and reminds us that the Rules of the Road exist. Similarly, most boats at anchor in such busy areas display an anchor ball by day, and an all round white at night. Not so in Scotland, where it is not uncommon to see yachts at anchor displaying neither the correct mark by day, nor a light by night, and the more out of the way the place, the more this seems to occur.

Now I’m not a huge fan of rules and regulations by nature, nor I suspect are most yachties. We go to sea to co-exist with nature’s laws, and long may it remain so, but there are very good reasons to observe the Collision Regulations, especially in regard to anchor marks. It seems that in what are perceived as remote areas, otherwise conscientious sailors let their guard down: Either by failing to display an all round white light at night or by putting up a tiny light with all the power of a half-starved glow-worm in a jam jar.

Many years ago I was at anchor with my then young family on a quiet reach of a beautiful west-country river. Ahead of us was a sizeable new Hallberg-Rassy flying a Dutch flag, looking very smart and purposeful. As the evening drew in, on went their anchor light, which jogged my memory and we followed suit. At around 3 we were jolted awake by the most almighty crash, followed by bright lights and angry shouting from up the river. Arriving on deck we could see a substantial trawler circling the Dutch yacht. There had been a major collision. Nobody seemed to be sinking though, and once it was clear that there was nothing that we could do, we turned in, shaken ourselves even though it wasn’t us who had been hit.

In the morning the skipper of the Hallberg-Rassy came over. It turned out he was a just-retired Master Mariner, the HR was his retirement venture, and he and his brother had been intending to sail to the Hebrides as a prelude to a new life at sea. Given that they had suffered major structural damage from the impact of the trawler, that was now out of the question and, as I saw for myself later, his brother was so severely shocked by the incident that he felt unable to continue. All I could do was to confirm that when I had turned in their anchor light had been shining brightly, and wish them well with the insurance claim. Weeks later the boat was still in one of the local yards finishing off the repairs, but the insurers had at least paid up.

The trawler simply hadn’t seen their light, despite the fact that there were no background lights in the lonely stretch of river we were in that they might have confused it with. This may have been in part because his was a masthead light, and those who argue that a legal light just above deck level in the foretriangle is a better option, may well have a point, as such a light may be more in line of sight from the deck or wheelhouse of a boat. But, whatever the cause, having observed the Rules the anchored boat was in the clear.

But what if they hadn’t been correctly lit, working on the premise that there would be no night traffic in such a remote spot? As far as I can ascertain they would likely have been responsible for not only their own damage, but also that to the other vessel (and the people in it), perhaps resulting in massive sums out of their own pocket. It doesn’t bear thinking about. From that day on I have always been fastidious about hoisting the anchor ball by day, and showing a 2-mile range all round white by night at all times, wherever we are, in compliance with the Rules of the Road.

And I’m reminded of that night every time I’m woken in a remote sea loch by the sound of a big diesel, or the wake of a working boat. Even in the most out of the way lochs and islands there are people earning a hard living from the sea, fishing, potting or attending to fish farms. They don’t keep normal office hours and we owe it to them, as much as ourselves, to ensure that we observe these simple rules, especially as it only costs us a few amps to do so.