Jonbuoy—Stuff That Works (We Hope) 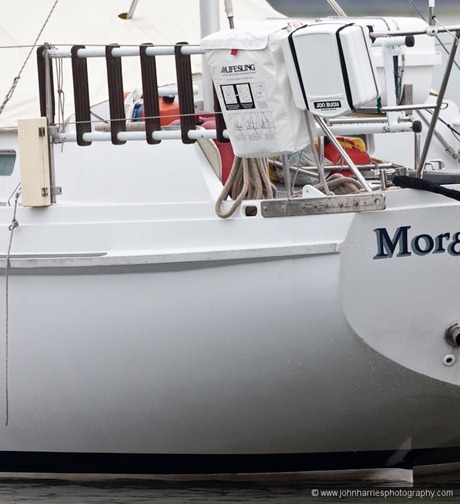 We have lots of ways to get out of the water on “Morgan’s Cloud”. From left to right: ladder that can be deployed from the water with a pull of the lanyard; custom-built swim ladder; Lifesling; JonBouy.

The winter we spent in London England living on Morgan’s Cloud at St Katharine Haven next to Tower Bridge, was wonderful. We walked all over the city and soaked up the history and culture. And the pubs…wow!

While there we took our MOM and liferaft to Ocean Safety to be serviced. They were great—they inflated our liferaft and let us see how everything worked, always a good idea.

A New Option in MOB Recovery

The other thing they did was condemn our MOM, since the fabric had failed. They suggested the Jonbuoy Recovery Module as a replacement; at the time a relatively new option, which they had developed. The Jonbuoy has a tall inflated mast, which not only makes it easier to see in the water compared to a lifering, it has a lifting ring on the top of the mast so that the MOB can be easily raised on deck with a halyard. Also, the mast is integrated with a teeny liferaft that the person in the water can climb into, an added benefit in cold water.

The Jonbuoy that we bought in England in 2001 was just condemned this winter during service, not a bad lifespan for equipment that lives on the rail full-time. So we replaced it with another Jonbuoy from LRSE, the US distributors, another great company we’ve worked with over the years to service our safety equipment.

No, we don’t have a Danbuoy. It seems to us that the inflatable Danbuoy falls between the Lifesling and the Jonbuoy—it’s not attached to the boat but neither does it have a lifting ring or the option for the person to get out of the water. And the rigid Danbuoy, together with an associated lifering, takes a long time to deploy, which is particularly problematic for a shorthanded crew, and is easily tangled on its way overboard (firsthand report from John based on many MOB exercises over the years).

My greatest fear is that John will fall into the water someday, it could even be in an anchorage, and it’ll be up to me to get him back. It seems to me that, given a scenario in which he’s not able to help me (only a few minutes in cold water can be incapacitating), getting a halyard clipped onto the lifting ring on the top of the Jonbuoy’s mast, which should be close to deck level, would be a lot easier than trying to attach to the ring on his lifejacket, way down at water level. If, god forbid, he ever does hit the water, I want the best chance possible of getting him back on board with me…where he belongs.

Do you have personal experience with any of this MOB recovery gear (through practice or in anger)? Please leave a comment.

LRSE kindly gave us a slight break on the cost of the Jonbuoy of $100.00. Not enough to influence our feelings about the Jonbuoy!