Q&A: Do You Carry Survival Suits?

Question: Do you carry survival suits and do you do anything special for working in the dinghy? I’ve seen ice suits, and all sorts of combo work/survival suits and we are wondering if we should carry something similar for the wilder areas?

Answer: Our thinking is that survival and exposure suits have very different, although overlapping, functions and that both should be carried for cold water offshore sailing.

Let’s start with survival (immersion) suits. We carry one for each crew member and the facts are compelling:

If you have survival suits aboard, it is important to practice donning them since it is harder than it looks. You should also know how to enter the water, right a life raft from an inverted position and enter it, all with the suit on. We did a course—the same one commercial fishermen take—with the Norwegian rescue service some years ago and learned all this, together with more esoteric things like how to exit from the wheelhouse of an inverted fishing boat with a suit on. It took just two hours in a pool and was well worth it. After the course I could see many places where a small mistake by a mariner without training could be fatal. The instructor is a personal friend and the captain of a Norwegian rescue boat that covers the Barents Sea out as far as Bear Island, and he says that going to sea in the north without them is just not a good idea. (Actually, what Knut would say about people that go to sea in the north without survival suits is not printable.)

However, survival suits are listed at US$500 to $600 (see picture top right), making the thought of equipping a boat with enough suits for the whole crew more than a little daunting. But don’t give up on the idea; they can be had at very large discounts, particularly from outfits that supply fishermen.

We also carry working exposure suits from Mustang (see picture bottom right). Again, these are a standard in the North. Look at every oil rig supply vessel and fishing boat from Newfoundland to Norway and this suit, or its Norwegian-made equivalent, is what the crew are wearing. The benefit here is that you can work in them, unlike the survival suit, but they will still keep you alive for up to an hour in zero degree (Celsius) water.

I have to say that we don’t actually wear ours often since we find a multi layer approach of wool and fleece under foul weather gear more comfortable and easier to adjust to changes in the ambient temperature. Also, the Mustang suit is not fully waterproof. (There is a very expensive and heavy Mustang suit that is, but we don’t recommend it.)

Where they come into their own is when working in the tender, particularly during high risk activities, like putting in a shore fast in bad weather or dinghy operations when there are large ice bergs around that could overturn and swamp a small boat without warning. The Mustang suit would even give you a good chance of swimming/floating to shore in the case of becoming separated from an overturned dinghy. Once on shore, the suit would keep you alive for hours or even days, even after a dunking.

There is another benefit of having Mustang suits on boats with wheelhouses that I discovered last summer on the 88’ Jongert I was guide/navigator on. On Morgan’s Cloud, with our open cockpit, we keep the heat below turned down low while underway so that everyone stays dressed warmly; of course, the watch stander on deck is fully kitted up for the conditions. In the event of an emergency on deck, the watch stander is ready for action and for the off watch below it is just a matter of throwing on foul weather gear and boots.

However, on the Jongert the crew kept the temperature in the wheelhouse at shirt sleeve level, despite the near freezing wind chill outside. In this case a Mustang suit at the wheelhouse door provided a quick way to get properly dressed in the case of a problem on deck. I can’t say I really liked this hot house approach since there is always the temptation to ‘just nip out for a moment’ improperly dressed, but I was overruled in the thermostat wars. 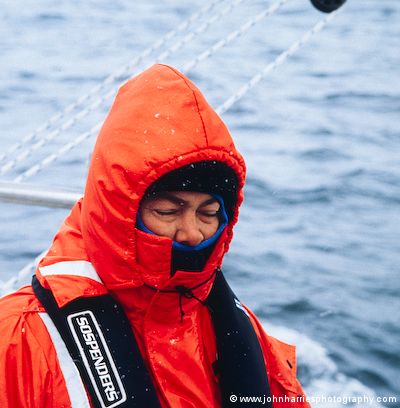 Our good friend and crew member, James Hallett, steers Morgan’s Cloud toward Baffin island from Greenland wearing a Mustang exposure suit. Yes, those white flakes are snow. I think his eyes were closed because he was fervently hoping that the trip was a bad dream and would disappear when he opened them. He is only wearing an inflatable life jacket because it contained his harness; the Mustang suit would keep him afloat and even has an inflatable head rest

A final benefit of the Mustang suit is that it gives you a full spare set of clothes that will keep you warm even when wet. I have never reached the bottom of my store of dry clothes but there have been a few rough passages where it has been close.

I like the Mustang MS2195, which can be had for around US$350 at discount and this is what I recommended for the Jongert last summer. See . The crew and guests loved them.