We spent Christmas in Nova Scotia. Phyllis’s family visited and her brother expressed interest in seeing the world record—there is some debate about this with some claiming that honor for Ungava Bay—tides in the Bay of Fundy; a great idea that spawned a car outing on a clear crisp day.

We have cruised both sides of the outer Bay of Fundy to places where the tidal range gets to about 25 feet (7.6 meters)—impressive enough—but at Christmas we spent the day on the shores of the inner bay and Minas Basin where the whole thing gets seriously weird: 50 foot (15.2 meter) tides, eight knot currents, and no ports that don’t dry out. These conditions, as you would expect, make yachts not only a rarity, but just about unheard of. I’m guessing that fewer boats cruise Minas Basin (the inner part of the Bay of Fundy) every year than go to Greenland.

My immediate thought when looking over the bay was what an adventure cruise this area would be, and no more than an overnight sail away for a vast number of boats. Is it attainable? Most sailors in North America would say no, but to many from the south of England or Brittany, drying out is a twice a day occurrence; and not just in shallow draft or lifting keel boats either: They lean deep boats up against a wharf or use legs to support them.

I haven’t done any research on such a cruise and have no idea if it can be done, or what the risks are, but it does show that unfrequented and interesting cruising grounds can be closer than you think, at least for the adventurous. Drop us a note when you get back. 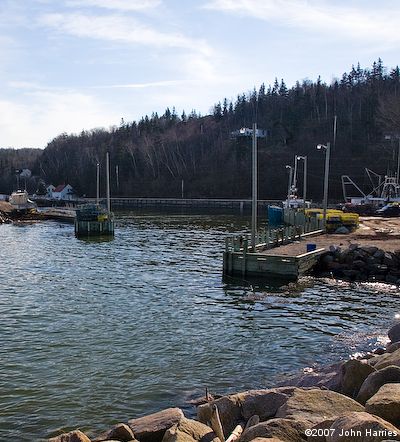 A harbour in Minas Basin, Bay of Fundy, Nova Scotia, at high tide 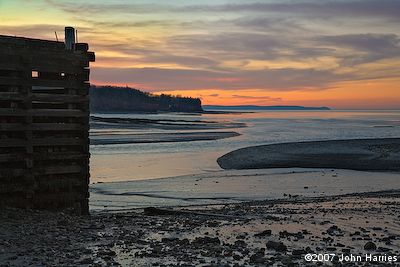 And without water. The wharf is large enough for a full-sized ship to load cargo