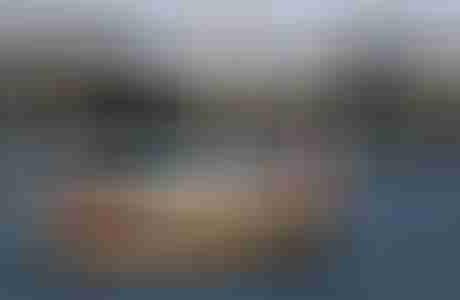 On our way to Svalbard (Spitsbergen) in Morgan’s Cloud in 2002, we stopped at Teltvika, a cove on the west side of Bjørnøya (Bear Island), a virtually uninhabited island which lies at the halfway mark on the 550 nautical mile passage from Norway.

During our second evening at Teltvika, the fog came in pea soup thick and the wind started to blow hard. Around dinner time a very English voice came over the—until now silent—VHF, saying it was the sailing vessel Sumara calling for Bjørnøya Radio, a radio relay station on the north coast manned by a few Norwegians. When they were unable to raise Bjørnøya Radio, John managed to connect with them, only to find that they were hoping to anchor in Teltvika for the night.

As Sumara didn’t have radar and the entrance was an uncharted rock garden, John talked Alasdair and crew in between the rocks using our radar and, when we saw that they were just off our stern, John suggested they drop the anchor. (All this without ever seeing a sign of them, the fog was so thick.)

Imagine our surprise when we got up the next morning to no fog and the sight of a 26’ Vertue, brightwork hull, anchored just off our stern! And that is the story of how we met Alasdair, Sumara’s owner.

Well, Alasdair is getting ready for a very challenging voyage this summer: His goal is to sail to Jan Mayen and climb Beerenberg, the 7500-ft ice-topped volcano that towers over the island. He then hopes to sail to East Greenland before returning to the UK.

Alasdair and his crew are going to great pains to prepare themselves and S/V Sumara properly for this immense undertaking. You can follow his adventures on his website. I promise it won’t be boring—Alasdair has a great sense of humour, most of it aimed at himself!

Proof that it takes something other than a big boat to step outside the night and to actually live one’s dream.

Teltvika, Tent Bay… shelter and close companionship. Sounds like it lived up to its name.

Do you normally keep your VHF working when on the hook? i usually shut mine down once the hook is dug in primarily because in my area it would be a disturbance well into the evening hours that I neither want nor need not to mention it is added load on the batts…Sounds like you keep yours working…If so please advise why and thanks…richard in tampa bay (cavu’s skipper)

The only time we leave the VHF on at anchor is when we are in very isolated anchorages in the north, such as Teltvika, where there is so little traffic that it’s not a disturbance. In the north, we feel it is important to keep the radio on for two reasons: 1. To be able to render assistance if necessary, since other help could be a long way away; 2. To find out if anyone else is nuts enough to be out there!

Enjoyed seeing someone having one hell of an adventure on a little wooden boat – Me, I am a wimp so I’ll stick to my metal boats, but good on them.

I have been vaguely thinking I need a bigger boat, or I need watertight bulk heads, or I need a feathering prop… But all I really need is to get off my backside and go… (oh and abit of extra money, and maybe one of those fancy new anchors?)

Thanks Alasdair, and Phyllis for reminding me about the essentials.

When I hear of small boats like this going out on great adventures, I immediately know that these are special people. They have parsed out lots of stuff. They do a great deal with much less than owners of a 40′ or 60′ sailboat could possibly imagine. Everything has to be multifunctional. Everything is thought through to a higher standard than usual. The equipment is often tops, eg Sumara carries G7 chain on a relatively large Rocna. Small boats have mobility, & rapidity in reaction time. The Pardeys are another fine example. I cannot say enough about this class of people.

I agree with all the positive things you have say about those that go to sea in small boats.

On the other hand, I have to admit that I’m just not that tough and subscribe to the old adage that you should never go to sea in a boat that has an overall length expressed in feet that is smaller than your age.

However, lately that does not seem to be working so well for me in that MC is 55′ and I’m…well, let’s just say we are not buying a bigger boat.

Alasdair is pushing forward in the spirit of Tilman – sailing to climb. I wish them the best of luck in their summit and sail.
Thanks for a great post, and a serious heads up on the impressive use of radar to help others.
John