Topics > People/Books > Champagne And Polar Bears: Romance In The Arctic

Champagne And Polar Bears: Romance In The Arctic

Approaching the lee shore of Nordaustlandet (the uninhabited—or so we thought—icecap-domed island separated from Spitsbergen by Hinlopen Strait) in a building gale in early August of 2002, was intimidating to say the least.

After negotiating the rocky and narrow entrance to Murchison Fjord on the west side of Nordaustlandet, we rounded the point and dropped the hook in Kinnvika (Kinn Cove), surrounded by some of the most barren terrain we have ever seen—and we’ve seen some barren stuff! So you can imagine our surprise when we saw two people and two dogs on the beach, among a group of buildings left over from the research station built by the Swedes for the International Geophysical Year of 1957/58.

The research station built by the Swedes for the International Geophysical year of 1957/58 on Nordaustlandet, Svalbard

When we beached the dinghy, we were met by Marie Tièche and Hauke Trinks, a couple who were at the beginning of a one year research stint at Kinnvika. Several years earlier Hauke, an eminent professor from Germany, had spent a lonely winter on Spitsbergen conducting research into the origins of life in sea ice, while frozen into the ice on his sailboat Mesuf. When faced with another winter in the north doing research, he decided that this time he was going to spend it based on land and with a companion. And, as he told us, if he was going to winter over with a companion, he would much prefer that his companion be a woman.

Marie is an Englishwoman who was working in Longyearbyen (the main town on Spitsbergen) where she met Hauke in the pub one night. Within an hour of meeting each other, he had asked her to accompany him to Kinnvika. Showing true grit and an amazing sense of adventure, she agreed to go. 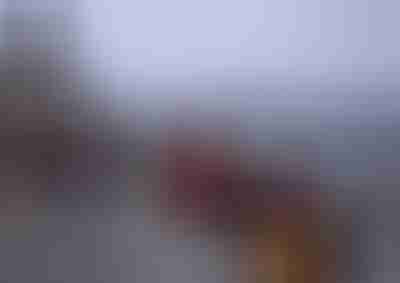 Two of Morgan’s Cloud’s crew at the cairn overlooking Kinnvika exhibiting aberrant behavior after just four weeks in the high Arctic. Obviously Marie and Hauke are made of sterner stuff

I won’t give away any more details since Marie has written a charming book called Champagne & Polar Bears: Romance in the Arctic that chronicles their year on Nordaustlandet.

The Norwegian Cruising Guide is a mine of information on sailing in Svalbard.