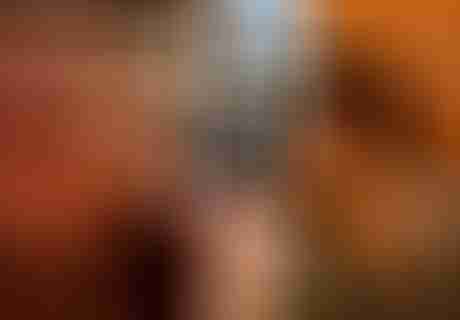 We joined our friends Dave and Shelly, who live and voyage on their beautiful, and beautifully maintained, Able Apogee 50, Cadence, for dinner the other night.

I knew that they had spent the day on maintenance tasks on Cadence and I could sense that it might have been a tough go. (It’s a sure sign of maintenance stress  when cruisers grab their first beer of the evening with both hands and drain the lot.) Once David had lost a little of that wild-eyed look that I know so well from the mirror, I asked him how their day went. This was his answer:

In order to repaint our deck nonskid, we had to remove some hardware from the deck. While we were at it, we decided to replace all of our clutches. Of course the holes did not match, so we had to epoxy the old holes, drill new ones and make new backing plates.

While we were at it, we decided to replace some additional backing plates. In order to get to one of the backing plates, I had to remove a hose to a manual bilge pump.

While we were at it, we decided to reroute the fresh water line to the water heater in order to facilitate access to the generator.

While we were at it, we replaced the vented loop for the generator.

While the vented loop was removed, we decided to redo a portion of the generator raw water system.

So what are the three most dangerous words in boat maintenance? While I’m here.

And, if you are wondering about the photograph. That’s Shelly reminding Dave whose idea all the additional tasks were.

Do you have a story of boat maintenance mission-creep? Please leave a comment, confession is good for the soul.

If I could add a 4th word, it would be rust.

What about, ‘this won’t take a minute’.

Note that “While I’m here” is four words! So since there are 4, I second Jerry that “rust” should be in there.

Another runner up would be “It won’t take long”. Never the case.

I’ll do it tomorrow

How about, “WHAT WERE THEY THINKING????”

How about these four words that I think are obligatory whenever your three words are said… “here we go again” – has to be said with a roll of the eyes though!
And love the pic of your friends – I recognise those expressions and gestures very well…

I keep trying to say to myself “It’s only work.” Dick

this is one laid-back group of people…nobody has yet to refer to using any four-letter words…maint projects especially on the boat are the only times i use them, but they are then often profuse and vehement…i read an article recently that said not to feel remorse for these profane moments because they help us cope better as in blowing off steam…richard in tampa bay (m/v cavu’s skipper, formerly s/v sidra’s skipper)

That is a gem of a photograph. I get the same treatment from my wife…

Rule of thumb: Take your first estimate of the time that will be required for any given maintenance project, multiply that number by 7.53 (which I’ve calculated from decades of experience), and the product will—over the course of a year or two—give you the average actual time needed to complete the job.

On weekends for me the job at hand is too often delayed by “beer break”, followed by “nap”. The ongoing battle is to have them as rewards for successful completion of the job, rather than lengthy intermissions. However, sometimes beer break and nap are necessary, to avoid taking a hammer to something that should not be hammered.

“Fix it now or fix it later, at the most inopportune time.”

After two circumnavigations, we have learned that sailing around the world is nothing more than the privilege of doing boat maintenance in exotic places.

I narrow it all down to one word. A four letter word that’s used so casually every day in reference to any kind of project, or plan, for that matter. See if you can find it…”I’m just going to replace that rusted hose clamp.” ” All I have to do is just tweak it a little.” If I can just tighten that a little more.” “I just have to open this hole a little bit” “Can’t we just stop by for a minute?”

I noticed the problem with this word when I was working alone in a normally 3 man machine job shop. A man came in the front door and asked how much and how long for me to enlarge the inside diameter of a 1 1/2″ flat washer. All the lathes were set up in small production pieces along with the milling machine. We didn’t have that dia. drill bit for our undersized drill press so I told him, “A couple of days and it will cost $50 (minimum charge)” He went nuts screaming ” JUST” TO OPEN THIS HOLE IN A WASHER? There is no “just”!

Well, since everyone has already said all that needs to be said, let me add this. Last Oct I was on a delivery to Lauderdale and we pulled into Charleston. We passed Cadence walking out of the marina. Since we were on a Chuck Paine designed boat, Cadence had a strong family resemblance. We all stopped to admire and compliment. What a looker! The Able 50s are stunning and Cadence is a shining example. Kudos to Dave and Shelly.

Want to help me sand varnish?
Seemed like a reasonable idea for a date to me?

Takes a lot of beer to build a boat”
“Frank”, one of my best clients!

I must remind all of us what this is all about:
“Sailing is the art of slowly going nowhere, at great expense”.

Expense being time and/or money, most of the time both.

Can’t remember who this is from !?

Yes John, a monster that is!

It’s looking at your work afterwards and saying “that ain’t right,” and then wondering if you said it out loud?

“I don’t need to deal with it right now”

Yeah, right . . . and it’ll become 10 times the chore! Problems do NOT fix themselves and messes do NOT clean themselves up.

Sorta reminded me of my thirty years in the U.S.NAVY, when aboard the ship the One M-C comes alive an we heard “NOW HEAR THIS”. It was never good news.

At home (not much when assigned aboard IKE a 120,000 Ton NUCLEAR Aircraft Carrier, and you are the Leading Chief). BUT, the few time I was at home the three words I dreaded most came from my FIRST MATE when she placed both hands on her hips and said;
“Listen To Me”. I knew then to put my fishing pole away.

Today, as we were coming out of the channel leading to the marina and turning onto the ICW, Kitty said, “Turn left! It looks too shallow ahead!” Instead of turning, I went straight; because I thought I was heading from one marker to the next, when BUMP and we were hard aground. You know you have a good wife when you don’t hear the four dreaded words, “I TOLD YOU SO”. She just asked if I wanted a cup of coffee while we waited for Tow Boat US to come and pull us off!

I learned about “mission creep” during boat maintenance and the frustration it can cause a long time ago. Personally I don’t mind it too much, I just keep on going until it’s finished. The family has another opinion altogether: they don’t sense a lot of holiday feeling any more once I start doing maintenance.
So I have a very simple rule: while the family is on board, I do maintenance only when absolutely necessary. The rest can wait for those times I am aboard all alone. This rule has given us a lot more joy!

I think the mistake EVERYONE is making is using words like finished, completed, done, or even crossed off the list. Beacuse sooner or later it will have to be redone, refitted, or removed. They never actually leave the list, they just move around. Other than life threatening problems, whats wrong with unfreezing rusted bolts in the carribean, better than in your driveway in mid-wherever water isn’t!

On second though…
“Entropy Rules”

How about these words:

‘beats sitting in an office!’ everthing is relative.
Cheers Colin

BOAT – “break out another thousand” – motto of Alex Blackwell

“Fix, replace, or do without.” – motto of Daria Blackwell

Adapted in the Caribbean 2010 by moi.

In an article about boat maintenance in the July 2012 issue of Sail magazine Amy Schaefer writes:
“Friends. . . named their homemade dinghy ‘Pi’ in honor of the fact that every boat project takes about 3.14 times longer than expected. . . . If you accurately estimated the time involved to complete a project, you’d be too depressed to ever pick up a tool.”

Not to burst your bubble but, “while i’m here” is actually 4 words. “I’m” is a contraction of “I am” and is actually two words, though it is written as one word.