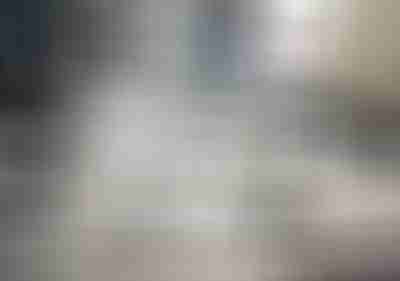 We last painted the engine room when we installed the Cummins 15 years ago. Add the present welding speckles to those 15 years of wear and tear, exacerbated by aluminum’s rejection of paint, and we were seriously questioning whether we should paint again while we had the chance.

But we decided not to. Instead, we gave the engine room a good scrub, said “good enough”, and took the time saved to do an extremely thorough job of installing two seacocks (we needed a new one for the engine exhaust drain and we needed to replace an old worn one).  In the grand scheme of things, we decided that ensuring (as much as we can) that the boat won’t sink was a whole lot more important than a freshly painted engine room.

Which reminded us of an incident that happened a few…okay, a lot of (where is the time going?)…years ago in the Caribbean. We had met the captain and cook of a big sister to Morgan’s Cloud and invited them to our boat for drinks. After a few, they admitted that they had seriously discussed coming over to Morgan’s Cloud and polishing our stainless steel stanchions and dodger bows—the rust spots were driving them crazy!

We just don’t have enough time and energy to keep Morgan’s Cloud looking like a yacht, keep her systems in good working order, and still do the creative stuff we enjoy like writing and taking photographs. So, yeah, our stainless is rusty, we don’t always get to the exterior varnish in time, our topsides aren’t polished, and the paint in the engine room is speckled.

But the engine and generator are always serviced on time, we do a rig check before each ocean passage, we will put hours of time and tons of energy into stuff like making sure we’ve got a heavy weather strategy in place and then testing it, and we’ll spend several days installing two seacocks. We’ve realized we can’t do it all, so we’ve chosen to let the cosmetics go and focus on the important stuff.

However, if you are sharing an anchorage with us and those rust spots are driving you really crazy…come on over. We’ve got rags and a full bottle of metal polish (we carry it around just in case)!

Do you think ours is a good policy, or are we just lazy? Leave a comment and let us know what you think.

Yes Phyllis, There are more important things to keep up on. Last week they had to cut two big sections of the bow out in Arctic Wanderer. I never thought about the chain locker, that it would rust out. It did take 27 years. Now I have to figure out how to prevent it. I have to make some sort of pan to catch the saltwater and drain it into the bilge 20ft aft. I’m so glad the welder found this problem as it could have sunk her.
Cosmetics top side, yea they can wait.

Already today, and probably more so in the future, it will be a bad idea to shine up your boat and make yourself a target for theft and harassment. Remember that we who cruise around on a pleasure yacht are wealthy capitalists to any harbor lowlife who fancies himself a sort of Robin Hood. The same goes for some underpaid Capitania del Puerto. My strategy is to look somewhat shabby and poor, not worth ripping off. It helps if you have a smaller boat. And it saves a lot of work!

I totally agree. I spend a lot of wasted time trying to keep my fiberglass boat looking “nice”. One of my attactions to an aluminum boat would be that it need not be painted at all. I would have no wood topside to keep shiny. Stations would be aluminum too so there is nothing to keep shiny. Hose down and you are good to go. There is enough “serious” maintenance without having to worry about looks.

Dear AAC,
My wife and I take about 8 weeks every spring doing yearly maintenance. First there is all the usual mechanical and head and galley stuff. Then repair and varnish all the teak and paint the topsides, varnish the spars, (a Gillmer gaff rig ketch)…The list goes on and on… I guess that an unhealthy dash of ego does get mixed up in this, but she sure looks pretty when we finally launch.
Cheers, Sue and Eric

Phyllis
If you spend your time trying to please everyone else you will never please yourself. Enjoy, it’s not a dress rehearsal.

It is a different point of view I know but when you have spent your career motor racing and polishing the rivets and paint inside the arches and under the car, looking at a spotless white engine compartment is a pleasure, and a spot of oil shows up in an instant, and servicing is a pleasure too. There is nothing worse than seeing a dirty or untidy bilge or uncared for engine, though I would point out that is not the case with Morgan’s Cloud!

Spring is fading and summer is surging towards us. Danza is launching in a few days and like you we have a few places that were not perfected. But we all carry on.

Thank you all for the comments.

We will use your comment, Robert, as an excuse in future if anyone comments on our less-than-shiny stainless steel!

Gary, sorry to hear of your anchor locker woes but very glad that the welder found the problem in time. We did an extensive survey of Morgan’s Cloud’s anchor locker during the refit and were glad to see we didn’t have any appreciable corrosion. However, we are also planning to drain the anchor sludge aft to a sump and then deal with it from there. The exact details will be revealed here once we know them!

MORGAN’S CLOUD (MC) was moored directly behind my boat CYGNUS – a Hinckley SW 50 yawl in Northeast Harbor, Maine last summer. When I looked astern at MC, I said to myself, “Now, THAT’s a boat!” For what it’s worth, MORGAN’S CLOUD looked perfect to me.

When it comes to cosmetic maintenance I think cruisers have to keep a balance. Your boat makes your first impression when visiting new places and it is wise to keep it looking presentable. In Nova Scotia one year a rather weatherbeaten and scruffy steel boat came in for clearance. They were nice people but of all the boats in the harbor they were the only one boarded and “detailed” by Canadian Customs. (Who found some more Caribbean rum than they were allowed.) Coincidence? I suspect otherwise.

Of course you can’t spend all your time in harbor polishing brass.

Our boat is no thing of beauty but we do try to keep up the brightwork and this alone seems to make her more appealing to visitors. Our stainless fends for itself!

Thanks for the kind words re MC, Patrick. We thought Cygnus looked mighty fine too!

You make a good point, Ed. We have learned to always look presentable when crossing a border by car as there seems to be a strong correlation between looking grubby and getting rummaged.

Hi there John and Phyllis,
We’ve just come across your site having bought the e-book version of the Norwegian Cruising Guide as we’re currently having a summer in the western Baltic and will sail up the west coast of Sweden and across the south of Norway before crossing the North Sea to Scotland. We’re liking the book very much and enjoying your web site – rapidly reading through it before our pay-for-time WiFi runs out.
We have a wooden toe rail on our boat – one side nicely varnished, the other self-stripping – i.e. we ran out of time to strip it, sand it and re-varnish so we’re letting it do the job of stripping itself! It was a case of do we finish the toe rail or go sailing…. sensibly, sailing won.
One good outcome of this is that depending on which side we berth we can look either fabulous or a bit scruffy – so we can now choose which character we want to present when entering a new harbour!

Sounds like you have the perfect solution, Nichola: turn the boat around depending on the situation! Hope you have a great cruise in Norway and Sweden. Thanks for the kind words re the Guide and the site.