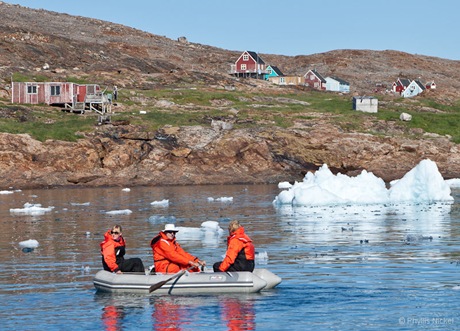 Wow! The last month has flown by! We’ve visited 12 communities (the unlucky 13th community was blocked by 7/10th ice so we had to turn back two miles out); traveled 700 miles through ice-choked waters, a lot of them sparsely and some not at all charted; crossed the Upernavik Icefjord twice, once in thick fog; anchored (and unanchored!) 26 times, sometimes several times a day; and spent at least half the nights on either full ice watch or what we call “prairie-dogging” (i.e. taking turns sticking our heads up the companionway to check on any potential ice attacks).

Grete and I discussed the project over a glass of wine yesterday and she shared a few themes that she felt were common to most of her interviews: deterioration in the sea ice, instability in the weather, and the change from hunting to fishing.

Grete’s interviewees reported that the sea ice forms later, doesn’t last as long, and is less reliable (i.e. thinner and more dangerous). This has major ramifications for a culture that has developed around the use of dogsleds on the sea ice for transportation, socialization and livelihood.

For one thing, people traditionally visited between villages in the winter using dogsleds on the ice. Now that the sea ice is unreliable and lasts a shorter time, they have to use helicopters, a big expense and restriction for a people who value relationships so highly.

Another ramification of the deterioration in the sea ice is the change from seal hunting to fishing. Due to this, and the ban on seal products by the EU, the Greenland government has removed the subsidy on seal pelts and is building fish processing plants and providing ships to pick up the product and deliver it to market. As one interviewee told Grete, “It’s very hard to be a hunter anymore”, a seismic shift for a culture in which being a good hunter was a matter of great pride.

Changes in the weather were also reported numerous times. One interviewee told Grete that the “warmth is warmer” than before. We can vouch for that, as we’ve had unbelievably mild weather and the sun actually feels stronger than on previous visits here.

Another problem is that the weather is more unstable, something we experienced personally in several unforecast blows. We assumed that this was normal for the area but Grete’s interviewee in the community where we were caught by the unforecast gale that I talked about in a previous chapter, said that historically that kind of wind has been extremely unusual, at least in the summer.

(Not So) Big Bergs 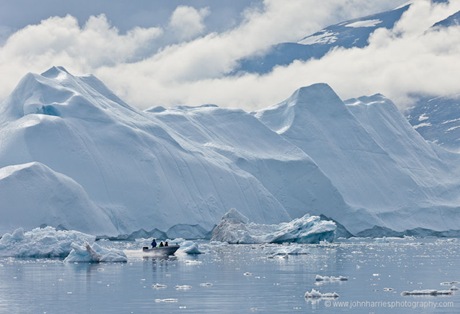 As an aside, though we’ve been amazed by how big the bergs are up here in the icefjords, Grete was told that in the past they were so large that one single berg could block an entire fjord. Actually, the big bergs aren’t the problem, it’s the small stuff (what we call “berg barf”!) that’s dangerous, as it’s hard to see, especially in sunlight or waves, which is why we have to have someone on watch every moment while underway. On a sad note, in almost every village Grete visited, she was told about boats (the locals mainly use small open motorboats with outboards) hitting ice, flipping and killing all occupants. 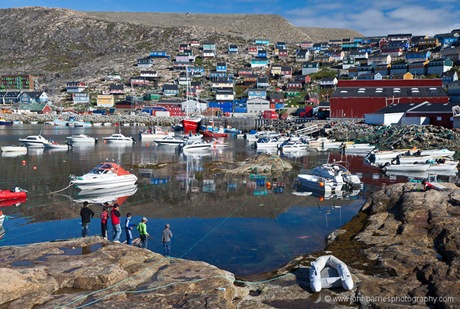 For John and I, this project has been incredibly interesting. Though we haven’t been able to spend as much time in the villages as we had hoped, as most villages don’t have a good harbour for a deep draft sailboat and so we couldn’t stay overnight or even leave the boat for long, we’ve been given a taste of what the challenges are for the Greenlandics in moving between these villages by water. Of course, what to us is a hostile environment is home to them…albeit a rapidly changing home.

Though the science project has wrapped-up, we still have a lot of miles to cover in challenging conditions and late in the season. Next stop: Baffin Island.