We were at Nanny Cay Marina in Tortola, getting ready to cross the Atlantic to the Azores via Bermuda. I had just gotten a Karma, GoPro’s attempt at entering the recreational drone market.

Starting With a Bang

On our ﬁrst test-ﬂight off the boat, from the slip, I ﬂew the drone out over the beach where some friends were playing volleyball. About a dozen or so other sailors had gathered around on the dock to watch. As the Karma ﬂew over Peg Leg restaurant, it lost its WiFi connection with the controller.

It reverted to ‘return to home’ mode, ﬂew back towards the boat at speed, and crashed spectacularly into the rigging just above the lower spreaders, smashing the rotors, falling out of the sky, and exploding as it bounced off Isbjorn‘s deck, leaving a deep gouge in the nonskid, before rolling into the water and disappearing.

In stunned silence, all the people who’d gathered round to watch walked slowly away.

That was the ﬁrst, and last, time that we crashed a drone from the boat. I blame it on the Karma: the drone communicates with its controller via WiFi, which has a horribly short range.

Since that day, we’ve ﬂown dozens of successful ‘drone ops’ with the ‘right’ drone, a DJI Phantom 4 (more on that in a sec), from the deck of Isbjorn and now Icebear, including:

Always managing to safely land the drone onboard and never injuring anyone in the process. 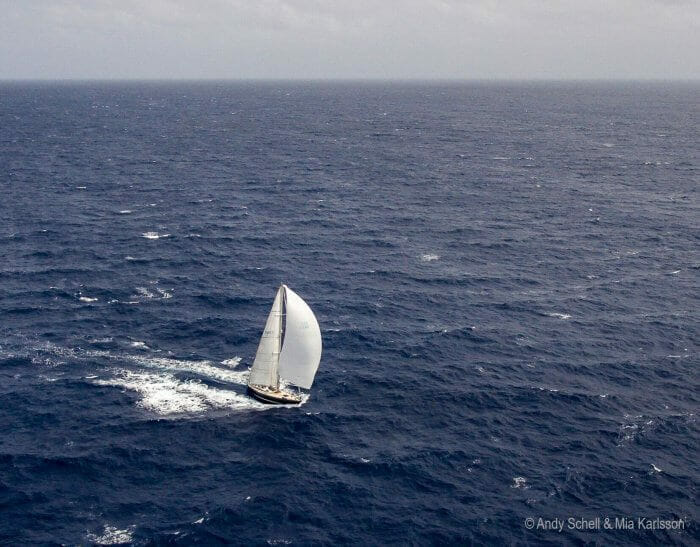 We’ve gotten truly priceless photos and videos of the boat at sea, shooting angles you literally couldn’t pay for—you’d never get a helicopter that far offshore even if you wanted to pay for it.

I read Matt’s recent article with interest on using drones and mast cams for pilotage inshore. Clever idea, but it’s never going to work, not unless you have a dedicated team piloting the boat, and another piloting the drone. I believe that you simply can’t do both at the same time, especially in tight, unfamiliar quarters.

For Ultimate Video and Photos

But as a toy, er, I mean tool, for fun, exciting photography and video? Oh, hell, yes!

Almost every time I post a drone video clip to our Instagram page I’m asked in the comments how we land it safely. We’ve made it look easy of late, but that wasn’t always the case.

In Scotland in 2017, we invited our friend and pro photographer James Austrums aboard Isbjorn for a three-week cruise from Oban to Shetland via the Isle of Skye, Stornoway and Fair Isle. James brought along his Phantom 4 in addition to his standard photography kit. The goal was to get him some practice shooting from the boat in preparation for when he would join us in the high Arctic for two months in 2018 to document our passage to Svalbard & Iceland.

In Scotland, we started ﬂying the drone from Isbjorn‘s side deck. Launching it was easy:

Landing, Not so Much

Landing it though was tougher. We thought that by heaving-to and stopping, we’d have a better chance at grabbing it from the side deck, opposite the boom and where there was the least amount of rigging to contend with. (Landing it on the dodger, or on some kind of contrived platform is out of the question, even at the calmest of anchorages—just too much rigging and stuff in the way.)

Well, as you can see from the little supercut video below of our antics, this side-deck landing business wouldn’t do. At best, it was tricky with the swell moving the boat up and down and James having to ﬂy it in three dimensions as we slowly drifted sideways while hove-to. At worst, we nearly lost it when I missed the catch, but James, one hand on the controller, somehow leaped and grabbed it with the other hand inches before it was about to smash into the boom.

Learning From The Volvo

Then we started watching the onboard reporters (OBRs) in the Volvo Ocean Race (VOR), which was happening that summer. The OBRs had the same drones (Phantom 4s) and were getting bonkers footage in the southern ocean, in big winds and gnarly seas, with the boats sailing at over 20 knots and water ﬂying all around.

Hell, if they can do it in that weather, we can start taking some more risks, James and I thought. So we changed our tactic, and followed the VOR OBRs.

Their technique was to use the back of the boat like an aircraft carrier. With no ‘crap’ hanging off the transom, the Volvo 65s offer a clean and unhindered launching and landing spot right aft. At launch, the drone ﬂies up, the boat sails away. At landing, if you mess up an approach, just let go the controls and the boat, still sailing, continues safely away—no crashing. We adopted the technique the following summer in the Arctic.

James joined us in Bodø, just above the Arctic circle in Norway, on our way to Tromsø, our ﬁnal jumping off point for Spitsbergen. James had two drones this time:

The Inspire was too big and too expensive to risk ﬂying from the boat, so we got good with the Phantom.

There is one small exception, a story that I just have to tell. On our second night in Spitsbergen, in Hornsund at 77˚North, just as I was about to go down below where Mia was serving dinner to the rest of the crew, I spotted our ﬁrst polar bear up on a rise on a nearby hill. Everyone raced on deck with cameras and binoculars.

Unbeknownst to me, given the excitement, James stayed below assembling the Inspire. Before I could say no, he handed me the thing and launched it from the boat, albeit at anchor. He hadn’t waited long enough for the GPS to acquire a signal, so very quickly the big drone was blown downwind on the breeze.

I ordered the crew to launch the dinghy so we could mount a rescue mission in case he had to crash land on the shoreline. So Steve, another of Isbjorn‘s crew, and I loaded the riﬂe, grabbed a survival suit and the handheld VHF, and dinghied in to shore while the others kept tabs on the bear, who was quietly eating a seal in a snow bank a few hundred yards up the hill.

Long story short, James regained control of the Inspire, got our ﬁrst shots of the two ‘isbjorns’ (the boat and the bear) and safely landed on the beach right where Steve and I had come ashore.

We returned to the boat just in time to weigh anchor, as a big slab of sea ice at the head of the fjord had broken loose and was drifting down onto our position. We moved, re-anchored, and ﬁnally ate that dinner at about 11:30 pm!

Anyway, we ﬂew the Phantom off the boat all the time, both at anchor and at sea, and got some once-in-a-lifetime aerial shots from that summer in the Arctic:

Our practice has paid off in the mid-latitudes too. Learning by watching James, I’ve become a pretty damn good drone pilot in my own right, and we’ve continued to push the envelope in weather conditions we’ll ﬂy the thing in.

Recently, on passage to Lunenburg, Nova Scotia, we had it up in 25-knots true, beam-reaching on Icebear, our new-to-us Swan 59, with everything up making 11 knots through the water blast-reaching towards the coast.

And check out this cool video we shot while sailing in fog:

This is how we do it:

Landing is simpler than it looks:

Check out the short video below of a full ﬂight at sea:

We’ve yet to lose a drone offshore, but we’ve accepted the fact that one day we probably will. This is easier for us to say since we’re running a business and the drone is basically a marketing cost, but still, what’s the point in having it unless we’re going to push the envelope and get some truly unique footage? When it ﬁnally does plunge into the sea, well, then we’ll get another one—hopefully the Phantom 5 will be out by then!

Andy grew up sailing on the Chesapeake Bay and spent a year cruising Bahamas with his family. He met Mia on a backpacking trip in New Zealand in 2006, and the two have been seeking adventures together ever since. They've logged over 70,000 bluewater miles and have crossed the Atlantic a combined nine times (5 for Mia, 4 for Andy). Andy and Mia share their love of offshore sailing by taking paying crew on voyages on their Swan 48 "Isbjorn" and through their wildly popular podcast On The Wind Andy & Mia are based in Sweden when they're off the boat & love endurance sports!