As a young guy, one of the first cruising boats I sailed aboard was a lovely little wooden sloop. Originally gaff rigged, some well-meaning previous owner had changed her to Bermudian rig, doing nothing for her sailing ability (as was so often the case), a weakness that was exacerbated by an oversized mainsail that had obviously been inherited from a far bigger boat.

This set more like a spinnaker and, with round the boom reefing, was a nightmare in a breeze, pulling the poor old girl over on her ear. In a bid to flatten the main, we piled in sail bags, cushions and anything else to hand as we reefed and, despite my inexperience, it was obvious that there had to be a better system than this. 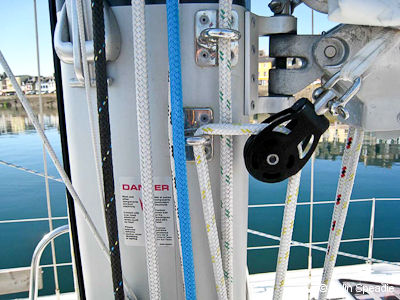 Thirty years on I’ve sailed boats with every type of mainsail reefing. All have their good points, but with increasing age and with both of us with dodgy backs, the idea of staying off the deck and handling all lines from the cockpit seemed seductive. But it seems to me that this system only works if it is easy to do and does not involve leaving the cockpit—at all. The last boat I sailed with single line reefing was a disaster, but all the gear—blocks, winches—was undersized, and most of it was cheap kit that was worn out. As a result, it took up to ten minutes to get a reef in effectively, and shaking it out took almost as long, and by the time the job was finished I was exhausted. Suddenly it became clear why we see so many boats carrying their full main and a scrap of jib, or headsail alone in fresh breezes—the old maxim that if a job’s easy, you’ll do it, is always true, and if it’s far easier to reef the genoa than the main, that’s the way you’ll play it, despite the fact that the boat may be unbalanced.

But we reminded ourselves that some people swear by single line reefing, so there had to be a way to get around some of the inherent problems, such as friction and excessive amounts of line. Roller bearing cars on a separate track have so much going for them that they are almost a necessity, as are adequate sized winches, and we’ve had no problem in that regard from the outset, but we’ve had to iron out a few bugs in the system to improve matters.

The first of these was to replace the inhaul eyes mounted on the mast, as the originals were pressed stainless steel, and were not only too flimsy, but were sharp edged and chafed on the other lines. We had some hefty eyes made out of round bar, and these are far better.

The second big improvement was to replace the mast base and luff blocks with low friction Harken models, which has taken a considerable amount of friction out of the system.

So now we’ve been concentrating on working on our technique and fine tuning the system. When we started out, on nearly every occasion we reefed, we still had to get out of the cockpit to clear a tumbled block, or to clear a bight of cloth jammed under the leach block. And although we’re still working on it, it’s becoming more and more effective. Hauling in the reefing line(s) as the halyard is eased works well, and marking the halyard and reefing lines, indicating the expected positions when the reef is fully home, has too. Fine adjustment of the block strops has helped so that the blocks at the luff are in the right position for the sail to set well. But still, far too often we end up getting out on deck to sort out one thing or another.

Chief culprit with this is sorting out jammed cloth at the luff end. This is partly because the sail is still new and very stiff and so may, in time, “train” itself a little, but it’s more than a nuisance. Over a long distance a badly pinched or chafed sail is going to suffer and obviously that’s to be avoided at all costs. One thing we have done is to swap over the second reef from the starboard side of the cockpit to port, in an attempt to alternate the lines better on the boom end.

The standard boat comes with a stack pack sail cover and at first it seemed like a great idea, and we can still see why they are popular for day sailing. But over time we like it less and less, partly because it makes it almost impossible to see what is going on with the reefing line at the boom end—Is there a big bight of cloth being pinched? Is the reefing block in the right place?—which generally necessitates a journey on deck! The second factor is chafe, as the stack pack is always on the move when underway, and not only can the pack itself chafe on the main, but you cannot easily lead the support lines forward away from the sail as you can with a simple lazyjack system. So we think we’ll revert to a mainsail cover for in-port use and a very basic set of lazyjacks when the stackpack wears out.

Our last boat originally had a hybrid system (half in the cockpit—half on deck) which didn’t work at all well, so eventually we bit the bullet and shifted everything to the mast. At least that way it was all in one place and we could put a reef in or out in a couple of minutes. You had to go on deck to do it, but it worked really well. We covered everything on deck in non-slip paint, including the coachroof sides (don’t boatbuilders realise that you are often on deck when the boat is heeled?), so it was safe to move around day or night and the only thing we lacked was a set of granny bars at the mast.

We’re going to persevere with the single line system for this season at least, as we’ve invested much time, money and effort, and there are still a couple of options we can try, which may be all it needs. But if after that we’re not entirely happy with the system, then it may be time to bite the bullet and change back to an at-the-mast system. Which may well seem a retrograde move, but it is so essential to be able to put a reef in quickly and efficiently, and, well, the OVNI does have a great set of granny bars….