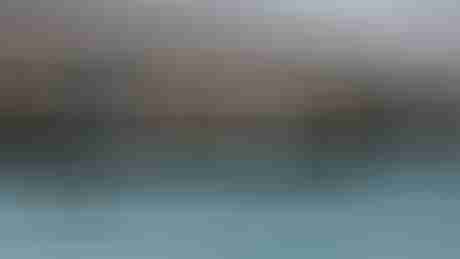 The hazards of remote harbours – at least this one’s charted.

In case you hadn’t noticed, we hate night entries, especially to new ports. Fishing gear all over the place, the shoreline ablaze with light, fatigue and stress; what’s to look forward to? And in the developing world add to that a heady brew of pirogues, unlit or missing navigational aids, unmarked wrecks and so on.

Technology (radar, plotters) may have made it easier to actually find your way in, but that’s not the half of it. We’ll always avoid entering in darkness, except in an emergency or to avoid being caught out by bad weather. Departures aren’t much better either, for the same reasons, although there’s slightly less worry if you’ve already found your way in, as at least you can follow your original track back out again.

During our stay in Dakar we had noticed that a consistent feature of the local wind was an overnight swing from northeast to northwest, before swinging back again in the morning. As our course from Dakar to the Cape Verde Islands would be roughly northwest, that would mean we’d be headed for most of the first night; bad for morale and a rotten strategy for this passage as we’d already have at least a knot of southbound tide from the Canary Current to cope with. So it wasn’t hard to opt for a first light departure. 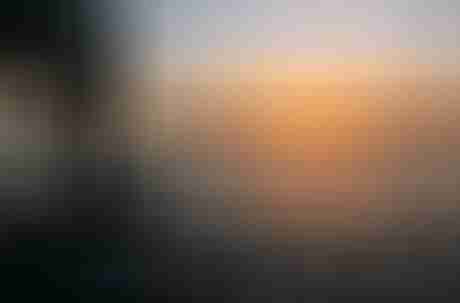 Leaving Dakar as the sun comes up. (Click on photographs to enlarge.)

Good call, as it happened, as we ended up close hauled for the first 36 hours, taking some solid packets of water over the decks for the first time in ages. Ovnis aren’t the sharpest boats to windward at the best of times (although they make up for it on other points of sail), and poor old Pèlerin, loaded down to the gunwales with food, fuel and water, just had to do her reluctant best. Comfortable it wasn’t.

The First Thing To Go is The Plan

But at last we felt able to free off a little, and the wind backed and eased considerably too, so the comfort factor settled down into its more usual mode. Our original plan had been to call in at the first of the windward group of islands, Sal, to pick up our friend Ronnie who is joining us for the crossing to Brazil. But as the list of minor niggles that would need attention grew longer, it became clear that we’d be better off going direct to Sao Vicente, where the main port Mindelo has become something of a last chance saloon for yachts with technical issues. Friends had spoken well of the technicians at Marina Mindelo (the only marina throughout the archipelago), so we decided to bypass Sal and head straight there.

In any case, we were only too happy to be going to these islands, which have a rich seafaring tradition, and a unique culture of their own—part African, part Portuguese. Lou was looking forward to hearing the local morna music, whilst I was hoping to see some of the whales that gather here in these rich waters. So we really didn’t mind which island we fetched up on.

The change of plans necessitated a a review of the pilot book. Which, in the characteristically gloomy tone they often adopt, spoke of strong tides in the approaches, overfalls, wicked katabatic squalls bowling down from the mountains—it sounded like the Hebrides!  Knowing that on top of all this entertainment we’d also face all of the usual perils of remote ports in Africa, it wasn’t hard to rule out a night entry.

Which was just what our current course and speed suggested we’d have to do. So, once again, we reefed Pèlerin down and settled into a slow lazy sail along the now visible island shores. Like most modern yachts, Pèlerin doesn’t heave-to well, lying too much beam on for comfort in a swell, and in any case, we still had some miles to run, so it was far easier to keep her pointing in the right direction. In the warm nights out here an extra night of watch keeping is no real hardship, in any case. 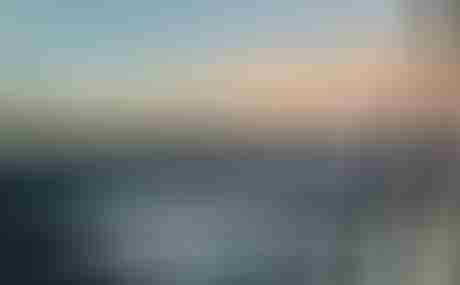 First light and blasting along the shore of Sao Vicente.

We could see the mass of Sao Vicente all night, then the mountainous outline of the next island, Santo Antao, and finally the channel between the two that would lead us into Mindelo. The wind had been rising steadily all night, so we weren’t sorry to ease the sheets at last and bear away to the South, as even under triple-reefed main and staysail alone we were taking some solid blasts from just forward of the beam—it was good to be back to broad-reaching again. 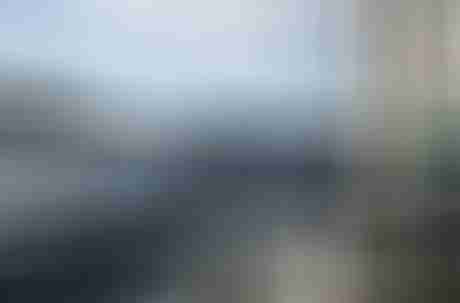 From ten miles out we’d had light, and entered the narrows just as the tide turned in our favour—we’d timed it just right. Years of sailing around Britain with its strong tidal streams and headlands does (at least) teach you to turn up in the right place at the right time to avoid a hammering. And we could have been in the western isles of Scotland, too, the vista of mountains and wild water being almost identical—just the temperature gave the game away. 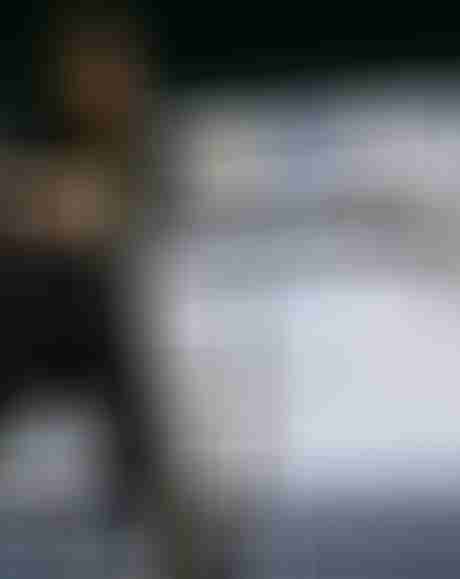 Reveling in the sleigh ride into Mindelo.

We always hand steer (or rather Lou does—she loves steering in conditions like these), when making the final approaches to a new port, as it gives you the chance to take avoiding action instantly if anything goes wrong. With the wind now a steady 25 to 30 knots, Pèlerin surged down the channel in fine style, before we gybed over to pass inside the Ilhéu dos Pássaros that marks the entrance to Mindelo.

One last gust of extraordinary ferocity gave us a quick reminder of who is boss around here and then we were in, looking at all of the hazards we’d have had to negotiate if we had arrived in darkness—shipping, wrecks, semi-derelict trawlers, unlit buoys and kamikaze fishermen. And as we finally, gratefully, dropped anchor, we were very glad indeed to have arrived in broad daylight.