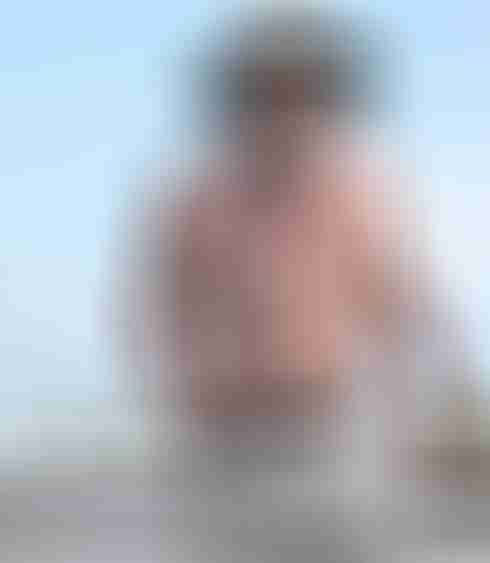 Phyllis and I had left Portugal on Morgan's Cloud just after a storm and got in at Porto Santo just ahead of another one...and the middle part of the two day passage was no picnic. Since arriving we had been hanging on at anchor by our fingernails, waiting for a gap to head for the Canaries, as one gale after another howled over the breakwater.

As we sat in the cockpit one afternoon, a small gaff rigged ketch appeared, beating through the arms of the breakwater. At the helm was a wild haired and bushy bearded man dressed in a pareo and an old tweed jacket.

The man guided the ketch deftly and purposefully toward us with one of his bare feet on the tiller, making the task of beating into a small harbour, raked with gusting multi-directional winds, look easy.

As the ketch crossed our stern, a biscuit toss away, the skipper yelled,

John, we're twelve days out of Falmouth, d'you have any rum?

Oh, one detail I forgot to mention, it was January.

…wild haired, bearded, naked, drinking womanizer, and above all sailor seeks woman with brains, grit, strength, toughness and knowledge of the sea for “platonic” (kidding) relationship.

Yes Paul, twas “…deeply stupid and unseamanlike” but isn’t the real question – “Will someone rescue my clueless ass (USCG), pay for my stupidity (insurance), or represent me (lawyer) to blame someone else?”

“These seamen all share a combination of brains, grit, strength, toughness and, above all, knowledge and love of the sea, which all distills into exceptional seamanship.”

Or perhaps they are crazy – who are we to judge?

Half daft, and bloody good sailor

…. and then there was Mike Bales the retired RN submariner who criss-crossed the Pacific for decades aboard Jellicle his flush deck Folkboat: one hand on the tiller and one on the pump. He who slogged to windward when most of us were loathe to head downwind.
Curried sardines and rice anyone?

There you go, another one. Of course being a submariner may have something to do with it. I have known a two: charming, unbelievably brave, but definitely a few fish short of a quintal, as they say in Newfoundland.

fascinating post…i remember crossing from nyc to st georges in early march as a twelve-year-old with my transferring u.s.n. father and my mother and wishing i had never been born because the conditions were so rough…sky totally slate grey the entire time, spray-filled chilled air, and endless breakers on the sea surface…oh, and this was on the ocean monarch…30,000 tons of passenger ship…at least i learned early on to avoid these parts until well into spring although once in bermuda our weather problems dissipated instantly…i was naively asleep in our warm and dry cabin at dawn while we entered st georges…what an experience that would have been to witness entry through that narrow opening on board a ship although i later did it several times under sail as an adult…cheers

meant to say above that i think lin and larry pardey fall into this category of seamanship…several circumnavigations with engineless boats they built themselves with only minor scrapes along the way…heck, larry and paul even resemble each other…cheers again

Larry, Paul and Sir Robin Knox-Johnson all look alike. I think it must be a rule that if you sail naked on old boats for 20 years, you sprout a mop of hair and the bushiest of untamed beards. It’s a tribute to the Neptune that has yet to kill you.

John,
Thanks for this piece on Paul Johnson. He truly is unique and “a legend in his own mind”. I first met him in 1965, in Martinique, when he had just sailed his 17′ yawl, VENUS, across the Atlantic. Rebecca & I again met him in 1971-72 on his 32′ boat built from wood salvaged from a church that he had razed. Then in November 1997, we encountered him, Paddy & infant Merlin while he was painting his 90-year old mother’s boat, prior to their winter Atlantic crossing.

In 1965, I also met Mike Bailes, on his Folkboat, in the Galapagos and Bernard Moitessier in Tahiti. Pat Synge neglected to say that when Mike Bailes was not pumping, he was using his non-tiller hand to pick weevils from his rice. He enjoyed slow passages since they resulted in a larger accumulation of beer money from his tiny RN pension, as he drank only while in port.

I have photos of both Paul on Venus and Mike on his boat, should you like copies.

Hi Paul
Thanks for the offer: I would welcome a photo of Mike to add to our album (my email is: pat at boatstasmania.com.au ).
What became of Mike? Any idea? We last met him in Sydney around 1984.

Jellicle was in wellington for a few years (around 1992 ish) getting a new deck fitted by a very hard working young guy who may have bought her off Mike? He put a small rounded deckhouse on her that looked very good.

Ben, I wonder if he then fitted a new hull to the deck!

Sid, are you sure he picked the weevils out of his rice? I thought they constituted added protein.

As for the long slow passages you mention. We were moored with him in Wallis Island waiting for the trades to moderate before heading off for Fiji when Mike upped and left. Destination: Tahiti – 1700 miles to windward.

Hi John
I was touched by the video. Passion comes to mind. Not crazy or dangerous just simply connected like Moitessier. I think it’s the heart of passagemaking.

On deck in rain in the nude.. highly unorthodox & highly practical. Reminds me of a Swede I heard about, who had a stainless steel toilet seat welded to the stern of his boat. He used it in all weather & swore by it.

Stainless steel toilet seat? I hope it came with a harness, a tether and a padeye, or I can imagine a new spot to lay down Treadmaster…