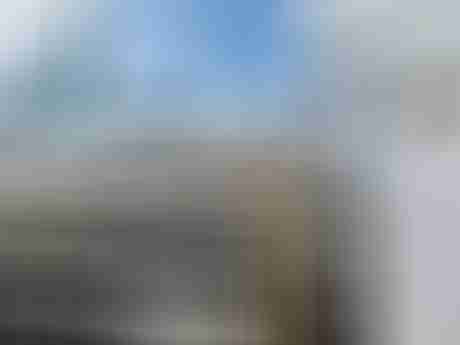 As the old saying goes, you pay for your pleasures, and that’s certainly true when it comes round to the annual re-fit. The many little jobs that were just too awkward afloat, added to the big ones like antifouling, can all back up and lead to a formidable worklist. And to top it all, there’s the curse of aluminium boats – the paintwork.

There seem to be two schools of thought with aluminium boats and paintwork. The first is to touch up as you go along, then sand and paint on an annual basis when time and conditions allow. The second is to pretty much leave it alone and then blitz the job every five years or so. We tend to the former, as we think that there’s less chance of corrosion getting a hold under blistering paint, and in any case, some of the ‘let it go’ boats we’ve seen looked pretty terrible to us.

We’ve been meaning to get to grips with the one area that is badly affected on Pèlerin, our OVNI 435—the topsides around the rubbing strake. We had a welded strake fitted from new, and have suffered considerable amounts of blistering along the line between the unpainted strake and the topsides. As we’re out in the yard at the moment and have staging alongside to get at this area comfortably, we’ve tackled this head on, and have got the affected paint off to the point where we can start to prepare the surface for painting.

But what a job it has been. It’s now obvious that moisture was able to get under the paint along the unpainted edge, and also under a fillet of polyester filler that was used to fair up the weld before painting. All of the areas of damaged filler have had to be removed, and we now face the choice of how to best make the paint surface look good, preferably without recourse to filler. Our plan so far is to fair it up by hand, then get a couple of coats of epoxy primer on and see how it looks. Minimal amounts of filler could then be used (if necessary) to achieve a good cosmetic appearance, before two further coats of epoxy primer, then undercoat and topcoat. We also plan to paint the strake, so that there will be no ‘edge’ for moisture to creep under in the future. Whatever route we choose, it’s going to be a lot of work.

The good news is that there is no corrosion, but that’s about it! It has been a long and painful business, largely due to a bad cosmetic decision in the first place. And it’s a pity, because this is about the only area on the whole boat that has been affected. Areas of high wear and tear, and where paint has been chipped, have of course suffered, but on the whole it’s more than manageable.

We’ve always used an International Paints system, and had always used their Etch Primer as a base coat, as all of the factsheets insisted that this was vital to achieve an effective tie with the epoxy primer. Now it seems that Etch Primer has been withdrawn from the market, it’s now straight on with the epoxy primer, so we’re hoping that this will work OK. I’m always a little suspicious when things that were once so essential before are no longer necessary today. No doubt there are good reasons why Etch Primer is no longer available, but it would be good to know just what those are, and gain some reassurance that the new system will work just as effectively in the future.

Because I know one thing—we don’t want to be doing this job again next year!