The summer of 2009 was a good one in Scotland, at least compared with the rest of the UK and Ireland. But as is generally the case, once the weather breaks, that’s it, the summer is over, and it’s time to make tracks.

We had set off from Tobermory on the Isle of Mull early in the morning, and by the afternoon were well down into the Firth of Lorne en route south to the North Channel before a long spell of southerly gales were due to set in.

Away on the mainland shore we could see another yacht beating South, and could soon see that it was another OVNI. A few minutes later we crossed tacks, and managed to take a few photos of her against the massive backdrop of Mull. A French 385 called Brecqhou, we had seen her earlier in the season in Arisaig, and she looked right at home in the wild setting of the hills. 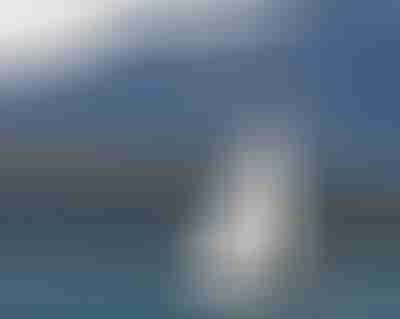 A brief chat on the radio led to an exchange of e-mail addresses so that we could exchange photos somewhere down the line before we parted, Brecqhou heading for the Crinan Canal, us on into the night and a quick stop at Jura.

Some time later we made contact once again, by which time I’d learnt a little more about Brecqhou and her owner, Hubert Perier. Since buying her in 2002, he has sailed her to the Azores, Portugal, Spain, Ireland, Iceland and Scotland, an impressive record. And it reminded me once again what great boats these are that demand to be sailed in this way, and that the French sailors really do use them.

It’s odd that aluminum boats have never caught on in the UK. Apart from a short production run of a 28-ft multichined sailboat called a Sarum, and a few semi-custom boats from Whisstocks, one-offs apart, that’s about the sum total of alloy yachts that I know of. Yet they have been hugely popular for years in France, and not just OVNIs, although they are perhaps the best known of the French boats. I’ve just been looking through the boats for sale in the French sailing magazine Voiles et Voiliers, and of 48 yachts in the 13m size bracket no less than 14 are aluminum, and from 9 different builders.

And all of them are boats that are capable of long voyages off the beaten track: 3 OVNIs, 3 nice round bilge Garcias, two elegant Mauric-designed Meridiens and a variety of others. Anyone looking for a good boat for high latitudes could do far worse than start with any one of them.

I asked a boat builder friend why it was that British builders never took to alloy, and he suggested that one reason may have been that to build in aluminum would have meant stocking such a wide variety of different stock—differing hull plate thicknesses for example—that unless some sort of series production was envisaged it would never have been viable, and maybe there’s something in that. And it’s fair to say that we never built many steel boats either, so maybe it has more to do with our love of production boats, and the cost of building one-offs.

Either way it seems a pity, especially as the Dutch builders have taken to building in alloy, too, and with the same attention to detail they have always brought to their steel yachts. In Falmouth, where we lived for many years, there are still really good quality cruising sailboats like Rustlers being built in GRP, and even one-off wooden pilot cutters, but nothing in aluminum, although there is absolutely no reason why not. The kind of craftsmen who work there are the equal of any others in the world, and I’ve no doubt could build aluminum boats to the highest standards.

So, until there is a cultural change, if you’re in the market for an aluminum boat, whether a one-off, semi-custom, old or new, then France is the place to look—and right now there’s plenty of choice.

I have been looking for a good reason for a first post on ACC and my recent viewing of a French designed and built, aluminum sailboat and your very pertinent article has led me to do just this.
I am pretty new to the world of sailing but pretty keen at studying and formulating a needs/wants list, for a robust and comfortable coastal cruiser, with live aboard potential, based out of Vancouver Island, B.C.
This has, among other things, led me to an appreciation of metal hulled boats, pilothouses and twin keel designs.
This particular boat, Marguerite 1, was owned by the designer, Michael Joubert and built in the Meta shipyard, who specialize in their “Strongall” building technique.
She was sailed through the Northwest Passage in 2012 (https://blog.mytimezero.com/2013/04/17/borealis-expedition-motorsailer/) and finally ended up in storage at the Canoe Cove Marina, in Sidney B.C. Sadly, Mr. Joubert passed away last year, which is the reason for her sale.
I reckon that both you and John and so much of your very informed readership are familiar with Meta and Mr. Joubert and perhaps, Marguerite herself and I certainly highly welcome any feedback that anyone may have.
For anyone who is interested, I include:
http://www.voilemagazine.com/2016/03/michel-joubert-salut-lartiste/
Thanks so much to everyone who contributes to make this such a superb resource.

I took a look at the links, but did not see much detail on this particular boat. Do you have a link to a listing?

Also, if you get really serious, you may want to consider Colin’s consulting service. There is no one better to advise you on these types of boats.

Thanks for your reply and for looking at the links, as well. I did a lot of online digging to gain detailed information on her but there was not much and the broker was not yet, too well informed, either.
The only specs I have gleaned, are from what I have sourced online, from the magazine article I linked to.
Thanks, as well, for Colin’s website. Maybe I will drop him a line, to see what his thoughts are.

Art,
Jackie and I looked at Marguerite last September, we were alerted to the impending sale by a friend who helped deliver her to Vancouver Island. Like you, we were looking for a French aluminium shoal draft pilot house boat.
Claude Joubert and Bernard Nivelt were aboard and we had a brief sea trial. We liked her a lot and were very impressed with the thoughtful design. As you have identified, the Strongall system is strong even if not impregnable, as M. Joubert found out. We visited the META factory in France last year as part of our boat quest and again were impressed with the ethos and engineering.
For us, the stumbling block was her current lack of sailing ability. Since the rig was cut down to match the reduction in the draft of the bilge keels prior to her North West passage, she has become effectively a motor boat with auxiliary sails and the engines run continuously. However she is certainly a robust and comfortable coastal cruiser capable of far more once you have gained experience and if you have a taste for it. She appeared to have been well maintained and had a very homely feel, unlike almost every other boat we have looked at in the past six months.
Good luck with your quest.
Robin & Jackie Hartley

Thanks so much, for the reply–I couldn’t have asked for better, than from folks who have sailed Marguerite, visited where she was built and who met and talked with Michel’s wife and design partner.
Your comments about her sailing ability are what I suspected and the hour meters on the engines, at 8500, tell the tale that you describe. Hmmm…
The boat certainly has undergone a lot of modifications in her life. I suspect the change from the canoe-style stern was taken after her grounding, when she was in for repairs.
I did view the boat with a friend who has a very experienced eye and like you describe, found her to be well-maintained. The air was very dry inside–not a hint of damp odour.
I think that the boat would be ideal for exploring these coasts, so will continue learning more about her.
If you care to talk more about all of this via email, I would very happy to hear from you.
My Gmail address is my full name: arthurkernaghan.