Question: We are hoping to draw on your experience with teak deck replacement on our steel sailboat…Despite our initial plan of just stemming the leaks for the short term until we sailed somewhere fun, they are just too bad and the deck has to go next spring/summer. While going through the process of finding someone to sandblast and paint the deck, the contractor brought up the problem of welding, if needed, since we have insulation (sprayed in UFFI). How did you handle this?…Also, would you recommend laying Treadmaster? 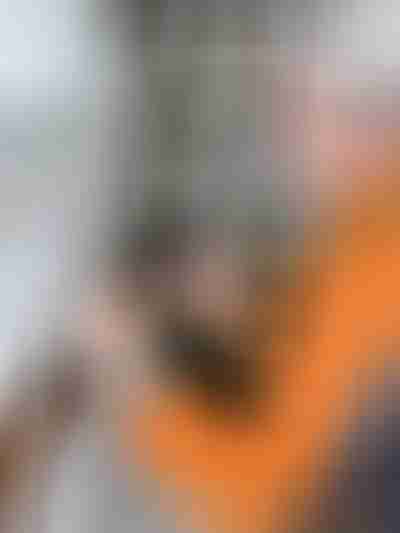 Answer: We were relatively lucky since our teak decks were fastened with aluminum screws into the aluminum deck, so we were able to air chisel the teak off, leaving the ends of the screws in place, which meant we didn’t have to fill a thousand holes. We then covered the entire deck with epoxy putty and (later) with Treadmaster.

At the same time we removed the teak, we welded threaded plates on the deck to hold all our deck fittings so that we didn’t have to screw any fittings through the deck. (We’ll go to a lot of work to avoid deck leaks!) We also had new toerails welded on at the same time (we removed the teak toerails). We removed all the overhead and during the welding there was always someone below with a fire extinguisher in case the insulation caught on fire (it never did).

We did install the Treadmaster ourselves and are very pleased with it; however, it is a major amount of work. I’ve detailed it all here.

All that said, however, we’re not sure what all the issues are with a steel boat. Do the screws need to be removed to avoid rusting or can you do what we did and cut them off at deck level and cover them with epoxy putty and then Treadmaster?

If they do need to be removed—which is what we think is the case due to rusting—welding may be an issue since we think that welding steel has to be done at a higher temperature than welding aluminum.

One way to avoid welding might be to over-drill the screw holes, thread them, plug them with stainless steel machine screws and then cover the deck with epoxy putty and Treadmaster.

Whatever method you choose, removing the teak decks is going to be a huge job, as we discovered.

When we bought her, Morgan’s Cloud had a lot of exterior wood that we have since had to laboriously and expensively remove or replace with aluminum. After many years of dealing with the problems caused by wood and metal and their very different coefficients of expansion, we have come to believe that exterior wood on a metal boat is a very bad idea. We advise that anyone building a metal boat should keep this issue in mind in the design and anyone considering buying a used metal boat with exterior wood should look at what will be involved in dealing with the problems that will arise sooner or later (usually sooner!).

Hi John, Your point about welding threaded plates to the deck to take deck fittings, which obviously has a lot to recommend it, caught my attention. When putting fixings into the plates what steps do you take, if any, to improve the possibility that you will be able to remove them again at some future point? Do you rely on Tef-Gel or similar in this demanding situation? Alan

We liberally coat the threads with Tef-Gel and bed the fitting with polysulfide. We have never had a problem removing fittings treated like this, even years after they were put down.

John, Is there any objective way to determine the thickness of plate required for a given fitting, or is it simply a case of saying 10mm, or whatever, will do, keeping in mind that the depth of working thread will be slightly less?

We use a ratio of 2 times the diameter of the bolt to be safe.

Also, the depth of the bolt can be the same as the thickness of the plate as long as you bore and thread the plate before you weld it down, as we did. That way you are not messing with plunge taps which never seem to yield as good a thread as normal ones.

Hi John,
Building a duplex stainless yacht and will weld threaded plate to the deck but still go through so we can lock off with nyloc nuts.
By using duralac on the thread this should give watertight seal.
The sheet turning blocks will take a 9t load and I am concerned that a blind hole would work loose.
Also on the stainless deck we are sandblasting and then immediately coating with plexus adhesive which they also use to glue on truck mudguards.Then epoxy fairing and teak decks.

Each to their own, but if it were me, I would blind bore them, not go through. As long as the stainless plate that you weld on has a thickness that is 1.5 times the diameter of the bolt and the threading is done well, as I understand it, the strength of the thread will equal that of the bolt. (In aluminum we went with plate that was 2 x the bolt diameter to be safe.) We have sailed tens of thousands of miles and have never had a bolt back out, even though they are liberally coated with Tefgel.

Also, if it were me, I would not use teak, but Treadmaster—lighter and less maintenance. But then I’m into the industrial look and you may not be.

I have an opportunity to own and restore an aluminum yacht with teak decks. I’m familiar with boat restoration but this would be the first of this kind. Having been installed in 1976, the decks are worn and lifting/buckling in a few spots. What concerns me most, however, is the pitting in the deck due to the relationship of wood to metal – the wood is eating the aluminum. This deck was glued down as far as I can tell. I haven’t had the chance to lift any of the boards but can see the problems from below. I don’t think the pitting has caused any structural issues. I’ve enjoyed reading about your experience and solutions. What do you recommend I do to explore, repair and replace the deck. Open to suggestions.

You really need to think carefully about this project since it could be hugely expensive to do properly. The “wood eating the aluminum” is probably not the biggest problem. More likely the corrosion you are seeing is the result of galvanic action between the stainless steel screws that are almost certainly (given the vintage of the boat) holding the teak on and the aluminum deck. When you get the teak off you will probably find that each and every fastening, and there will be hundreds, has burned a hole through the aluminum. Fixing this becomes a big problem since corroded aluminum is very hard to weld well. I simply don’t know of a good and time efficient way to solve this issue. Anyone else out there with first hand experience of solving this problem?

If the decks are indeed just glued down (unlikely given the age) then the problem maybe much easier to solve: Take off teak with air chisel, grind and prep, replace with Treadmaster. In this case I would expect the corrosion to be superficial. However, I could be wrong, so I would insist on removing a test area(s) before buying the boat. No test area, no sale.

This is an old boat with big issues. Be careful that you don’t end up spending more than a much newer boat would cost you, it happens all the time.