We were out walking on the foreshore here in Nova Scotia a few days ago and came across this remnant of what I’m guessing was a commercial wharf. Clearly it had been in the water for quite a while before it fetched up here in a winter blow. 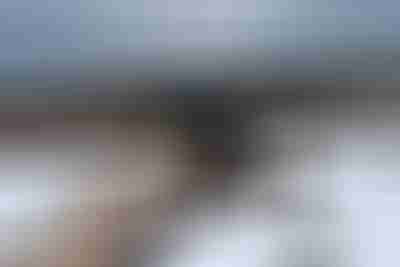 Of course I can’t guarantee that Morgan’s Cloud would survive a collision with it, but I’m pretty confident that it would not sink us, or perhaps even do that much damage. I say that based on our own collision with a large growler (baby ice berg) some years ago and our sister-ship’s eight knot meeting with a sleeping whale. The former did no damage at all, and the latter deformed the hull plate only about 1/4” over a 1 sq ft area. (The whale swam away too, I’m glad to report.)

Then there was the time that I hit the corner of a steel floating dock in Scotland when I misjudged the effect of a 40 knot gust at the wrong moment during a docking. The crash was horrendous, making me fear that the boat would start sinking immediately. However, the impact only left a deflection about as big as that left by the whale. In both cases the dents were just filled with epoxy putty and painted over.