A Change Of Latitude 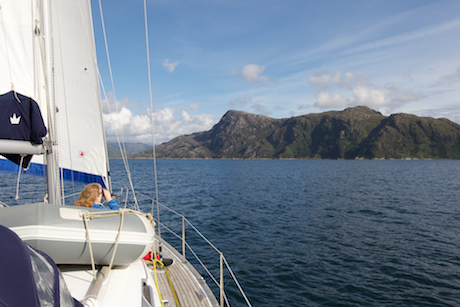 Shark spotting off Rum in the Inner Hebrides

We’ve just returned from two weeks in the western isles of Scotland, carrying out a short basking shark survey, our first in the area since 2006. Fortunately for us, the weather came good, and we had two weeks of light to moderate winds, with just the odd bit of wind and rain to remind us that we were off Canna, not Casablanca.

Back In The Driving Seat

Interestingly, John put up an eloquent post on his and Phyllis’ experiences working on a science project while we were away. And as I’d pretty much forgotten what it was like to be back in that particular driving seat, his thoughts were a sharp and timely reminder. There’s not much I can add to his account, except to confirm just how tiring these projects can be. When the weather is good, you have to push hard dawn to dusk to achieve as many of your goals as possible, and when the weather is bad you move the boat to position yourselves favourably for the predicted improvement—when it comes. And if that means an anchor watch all night in some remote bay, well that’s how it goes. And when the weather is really bad, you hide out, and climb the walls thinking of the time ticking away, and so much still to do.

Different, too, in that you are sharing your boat with others, whose main emphasis is sometimes at odds with your own natural instincts as a sailor.  Their scientific perspective and research parameters will soon remind you that on such a voyage you have to wear two hats as skipper and project leader, which isn’t always comfortable.

But it’s not all bad, as there is always a great sense of camaraderie within your team, and there are so many wonderful sights, sounds and smells in a place like the Hebrides to make it all worthwhile. During our voyage we recorded nearly 300 cetaceans (whales and dolphins) of six different species, plus a dozen basking sharks as well as seals, eagles and otters, many of them magical close encounters that will remain with us and our friends for ever.

Had much changed in the area over recent years? Well, there were more boats in the Outer Hebrides than I’ve ever seen before. Perhaps this is due to a growing enthusiasm for the wilder parts of our coastline, but equally it could be due to more boats basing themselves in the area to escape from the staggering cost of keeping a boat on the south coast of the UK. Either way, it’s great to see so many people discovering for themselves the beauty and diversity that the west coast can offer.

More facilities, too, with a long overdue small marina development nearing completion in Mallaig, particularly welcome as the port lends itself well to re-stocking and changing crews, and is a great stepping off point for a cruise in the islands. All good for the local economy, and (happily) not big enough to bring too many boats into the area—we don’t want it getting too popular, now, do we?

For the first time we were not in our own boat, or in my case the big gaffer that I worked on in the early years. The boat we chartered, although a few years old, was well maintained and held up well in the conditions we had, although on occasion we sorely missed Pèlerin or our bombproof old Frers cutter with their comprehensive equipment lists, and massive anchors. But she was solid enough, comfortable and sailed well in light to moderate conditions, which was all we required of her. But in terms of understanding where boat design has come to diverge between charter and long-term cruising it was instructive, to say the least, and certainly got me thinking about some of the design features that are now becoming dominant in the cruising boat field, that owe little to our needs and requirements as offshore cruisers.

So I’ll return to some of those matters in the coming weeks, but in the meantime I have to get Pèlerin ready for the next leg of our voyage south. It’s Ramadan here in Morocco, and very, very hot—a world away from our last cruising ground.