Topics > Destinations > Europe > The Best Of The Old World

The Best Of The Old World 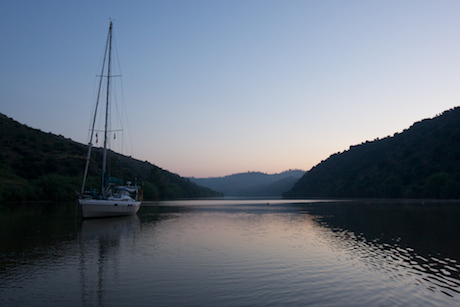 First light on the Rio Guadiana

It has been so good to be underway again, after a long, forced spell ashore. Not that it wasn’t without its positive side, but there are only so many weeks in a boatyard you can endure, even when it’s in a country as warm and friendly as Portugal. And it was even more enjoyable, knowing that we were on our way to one of our ‘gold star’ destinations, the Rio Guadiana, agreed upon at the planning stage of our voyage several years ago.

I’ve written before about our enthusiasm for navigating rivers, something that appeals to us as gunk-holers and creek crawlers. It’s also one of the reasons we chose an Ovni with its ultra shoal draft, so that we can really get away from it all. And having heard so much good about the Guadiana from friends that had been there, we were looking forward to exploiting that capability to the full.

Most of us think of the Algarve region of Portugal (and much of the adjoining Spanish coast) as being one long strip of tower block hotel developments, and from seaward that’s pretty much what you see. And as that isn’t the world we have set off to see, it would be easy to write it off as somewhere to pass by on the way to wilder shores. But look a little closer and there are shallow lagoons with small villages that have seen little development, and much of the countryside once away from the coast has hardly changed over the centuries. As we anchored whenever possible along the way, we were able to catch glimpses of a very tranquil past, some of which has endured to this day.

Arriving off the river we decided to miss out on the towns inside the entrance and head straight up under the road bridge that forms the gateway to the river proper. Creeping under bridges with only a few feet of clearance is not our idea of fun, but there was no way around it, so under we went, nerves jangling. A few miles on we anchored for the night to the music of a flock of sheep being driven along the bank, bells tinkling as they passed, a propitious welcome to the river, we felt.

For the next few days we explored a variety of anchorages, finally fetching up in a quiet reach by a smaller tributary, and we settled down to observe life on the river. On one day we were there this consisted of two elderly fishermen, one passing yacht, and a myriad of birds of extraordinary colour and song. Kingfishers, golden orioles, azure-winged magpies, bee-eaters and others treated us to a kaleidoscopic flypast as we paddled up the tributary to a Roman weir, where we portaged the dinghy into the clear mountain water beyond, and entered a Portugal that hasn’t changed since long before the weir was built.

But if the day was colourful and bright, then the night was even more remarkable. The wind died completely, and a soft velvet darkness enveloped us, the only illumination a sprinkling of stars—and the nightingales began to sing. Singly at first, in an almost exploratory manner, like an orchestra warming up prior to a performance, then more confidently and insistently. Before long the whole ensemble was in full flow, and we were entranced, immersed in their amazing musical virtuosity.

It is so hard to turn in on nights like these. Normally we both like to sleep as soundly as possible, but all through the night we found reasons to wake up, and for a few moments more absorb the magic of the place. First light saw us both on deck, soaking up the atmosphere, almost unwilling to see the new day dawn. Even as it did, we both agreed that we had enjoyed a transcendental experience that had definitely been one of the highlights of our voyage so far.

So often it seems that man has changed the landscape in such an all-pervasive manner that such times and places are harder and harder to come by. But they are still there, it’s just that we have to go the extra mile to discover them. Having Pèlerin allows us to do just that, wherever we travel in her, and it’s a real privilege to be able to do so. And as our voyage up the Guadiana proved so conclusively, despite the modern developments along the coast, the old world is still there to offer such remarkable experiences, especially for those of us who have the immense good fortune to live afloat.