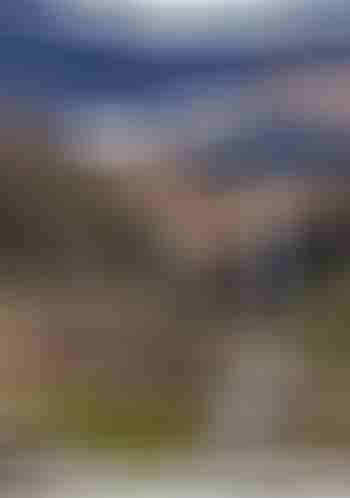 I first sailed to Labrador back in 1993, but even that visit was part of a cruise that included circumnavigating Newfoundland, which is enough all by itself for one summer.

Since then we have visited parts of Labrador on five other cruises, but always as a way stop on the way to or from Greenland or Baffin Island.

This year we transited the entire Labrador coast from rugged Cape Chidley jutting into Hudson Strait in the north, to Red Bay on the Straits of Belle Isle in the south, but in less than three weeks, which does not leave a lot of time for exploring. (There is nothing like being in North Labrador at the beginning of September to focus you on getting south as quickly as possible before the weather gets really horrid.)

Note To Self: Must Cruise Labrador

One day soon we must return to Labrador and make it the focus of an entire season. It really does have everything that an Attainable Adventure Cruise should:

The northern third is uninhabited with spectacular mountain scenery and a pristine national park complete with polar bears, that is really only properly accessible in your own boat. More in this post.

The middle third has inshore passages wending through an incredible island archipelago and is inhabited by two aboriginal cultures with several interesting settlements to visit.

The southern third has scores of deep, sheltered tree surrounded harbours and anchorages indenting a rugged coast that is sparsely inhabited by incredibly friendly locals.

And all of this starts just a thousand miles of interesting coastal sailing from the overcrowded waters of New England. In theory at least, you could even make a trip from Boston to Cape Chidley and back without ever sailing at night!

But Not To Be Taken Lightly

Having said that, Labrador can serve up vicious and unpredictable weather, berg and pack ice, and in many parts of the coast you will be far from help. And despite the improvements of recent years, once you get to the northern third you will have to contend with poor or nonexistent charting. In short, Labrador is not a cruise that should be undertaken by the inexperienced or poorly prepared.

Hi John,
Could you please stop this sort of posting?! It makes it harder and harder for me to decide where to head for next year from NFL. Should I circumnavigate Newfoundland, head back to Greenland to get a closer look, or up the Labrador coast, or maybe down to Nova Scotia??? You keep throwing bait for all these areas around. But then again, it makes for a whole winter of armchair sailing…
Thank you and all the best,
Hans

Or a cruise for the warm-blooded.

What a fascinating trip.

I agree with the comment by Hans. These type of posts are very distracting considering we live in Hong Kong and now have added Labrador to our growing cruising list destinations! Please stop!

Do you know the name of the British sailboat? You don’t see a gaff-rigged ketch every day. Was she a double-ender, say, Colin Archer?

She certainly looks like a Colin Archer (type), and probably wooden, although quite a number were built in ferro by the legendary ‘Mick the Brick’ at Gweek Quay Boatyard (Cornwall) some years ago.

Found her, 2 minute search on Google images. HANNAH. You are correct, ferro hull! Colin Archer inspired. They have a nice blog, “GafferHannah”.

Colin, how do you know this stuff? I always thought I knew a fair amount about yacht building history, but you put me to shame!

In this case it’s quite straightforward – she is definitely based on the Colin Archer concept, but has more freeboard (and built up bulwarks) than a true Colin Archer. I sailed briefly on an original when I was a teenager, and they have low freeboard.

The updated design is still popular (especially in Nordic countries) so she could have been wood, and imported to the UK. But lots were built in ferro at Gweek (very close to my home), which is why she looked familiar to me. Some of them at least were very nicely fitted out, and the build quality was reckoned to be good by ferro standards. So no great insight on my part, I’m afraid, just local knowledge.

Good to see her in action, though, and proof once again that you don’t need to spend a fortune to sail the world.

Beautiful photography as always. I certainly felt that Labrador was a cruising ground in its own right after our brief visit in 2010 and if I ever find my way back to the Northeast, I will head there again. All of your observations resonated with me. Labrador may be the ultimate, off the beaten track, but still just bearable (by my standards) destination.

Now, my question. Did you find the Cruising Guide to Labrador by the Cruising Club of America to be of value? In other words, did you use it?

All the best, Jim

The CCA’s Cruising Guide to Labrador is good and was our primary resource. We also used the Canadian Coast Pilot which is geared for larger ships but was still helpful. Rumor is an updated Labrador guide will be coming out spring 2012.

Thank you Alison. I appreciate the feedback. It would be probably be too much to hope that John could send the editor some of his recent anchorage photos to enhance the guide, with appropriate remuneration, of course.

To answer your question on the Labrador Guide. Yes, it is useful and we have contributed over the years. Having said that, it is very much an anecdotal guide full of stories of cruises, some going back to the 1950s, so it does not have the structure of a guide like our own Norwegian Cruising Guide, or Taft and Taft’s Cruising Guide to The Maine Coast, which is, in my opinion, the best guide I have ever seen and the standard by which all others should be measured.

Collin – local knowledge or not I’m impressed and we own the boat!! And it is so true that you don’t need to spend a fortune to cruise…11 years and counting.

Many years ago when I was working for one of the local cruising schools one of the other skippers had a Mick the Brick boat very similar to your own, although rigged as a gaff cutter. She was called ‘Skua’ (if my memory is correct) and he looked after her very well. Although not the fastest boat in light airs, once moving she could fairly eat the miles, and he had a good market for people who wanted to learn to sail gaffers.

Your ‘Hannah’ has obviously done you proud, so good on you both – and her, and here’s to many more years safe cruising.

Great to find this post – what wonderful photos. I’m sure you’ll inspire a few more to go down north along the Labrador coast.

For the past several years I’ve been preparing for a voyage in my own Colin Archer-inspired Tahitiana to Labrador and into Ungava Bay. I woul likew to retrace a voyage made in 1811 by an Inuk captain, his wife, family and two Moravian missionaries, who sailed from Okak (north of Nain) in a ketch-rigged 45 foot shallop to what is now Kuujjuaq in Ungava Bay.

Unfortunately the transmission was giving trouble and took all summer to be replaced. But hopefully summer 2012 will see s/v Kuan Yin sailing the Labrador. For more information, please visit my website.

John or anybody could maybe recommend some anchorages or places worth a visit on my direct route from Nova Scotia to St. John’s. I do not wish to deviate much from the strait line route because I go to St. John en route to Greenland, Iceland etc. So I am looking to places worth while stopping in the SE coast of Newfoundland.
Thanks!
Alberto Duhau, SY Shaima

We have written up most of the places we really like: https://www.morganscloud.com/category/destinations/

I’m sorry but I no longer get into providing specific cruise planning advice. Just not enough time left in my life after running AAC.

My wife and I are headed to Nova Scotia and hopefully Newfoundland this summer. We spent the winter in the Bahamas on our Vancouver 27 and we are now in the Chesapeake completing some boat work on our way north. We need to let our insurance company know when we plan to be in Nova Scotia and Newfoundland. I have enjoyed reading many of the AAC articles about cruising in that region, but I am having trouble determining how late in the season we may want to stay in Canada before sailing back to the US. At the moment we are planning to be in Canada from approximately July 15th to October 1st, but will tell our Insurance company October 15th in case we want to stay longer. Does this seem like a good time frame for cruising in Nova Scotia and Newfoundland? Thank you for providing such a useful resource!

Yes, I think those dates are good ones. When heading south along the NA coast from Nova Scotia I usually try to be at least in Maine by 15th October.