We just got an e-mail from our friend Louis Nielsen. Louis has lived for over 20 years, mostly alone, in a remote cabin on the west coast of Spitsbergen. He is one of the last, perhaps the very last, people to make a living as a trapper in the Svalbard archipelago, some 500 miles north of the northernmost point of Norway.

Louis is a seriously smart guy who has more real practical knowledge about the far north than just about anyone we have ever met. He is also well read and articulate so that when he speaks, or maybe pronounces (he is not shy with his opinions), we listen.

Well, Louis is upset at us and has been since he received our news letter at the end of 2003. We are talking seriously angry here, although he has cooled over the last three years to the point that he finally wrote and explained why he had been silent. The passage that offended him read:

“Climbing mountains is old hat to Ted, but to me the feeling of achievement and euphoria as we reached the top and looked out over Lindenow Fjord and west across the ice cap will always be a highlight of our northern cruises. At the top we built a cairn and left a note. Was it a first assent? Probably not, it’s not that hard, more a tough walk than a climb, but on the other hand there was no cairn or other evidence of people—so maybe, just maybe.”

I have heard people criticize the practice of cairn building on the grounds that it is environmental vandalism, although I’ve always had a hard time getting too worked up about a few rocks piled up in the wilderness as long as there is no erosion risk. But that was not what set Louis off, his point was:

“…and then, before you go down, build a cairn. A bloody cairn, that will make sure that nobody else can have the same experience–ever. Why? I just don’t understand it. Well, maybe I do, but still I find it nearly unforgivable.”

Now, I have always thought of cairn building as a tradition in the north going back to the early explorers and whalers and not thought that much more about it. Over the years we have probably built half a dozen, usually near remote anchorages with a note in a bottle inside them in the hope that someone will find it and write to us and in that way we will get to communicate with someone else who loves wild places. But after reading Louis’ e-mail I’m wondering if that theory is just a justification of the age old urge to leave a mark. 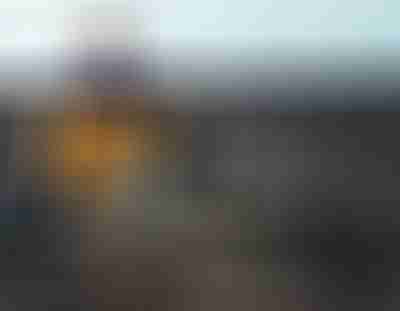 Worse than that, perhaps by building a cairn what we are really doing is saying “I got here first” (whether that is true or not) “and you who come after need to know that I was first, so there”—not an attractive reason.

So after thinking about it over several days, I think Louis is right. In the future I might build a cairn to start a ‘post office’ in a remote anchorage that has obviously been visited multiple times, but no more cairns on the top of mountains or at anchorages that might not have been visited by a yacht before. I will let others share the rare and special feeling of getting to a place where there is absolutely no sign of humans.

I like the idea of leaving a message in remote places…it is the way to meet people like yourself. So at remote anchorages leave a simple message.

I am not fond of cairn building either and it brings to mind another pet peeve: “fairy house” buildings along what should be naturally beautiful paths through the woods. I have seen Maine islands littered with these foolish things.

(Steps down from soap box)

I feel as strongly as Louis – so much as to say it’s like a dog leaving its mark. I live on the west coast of Ireland in a beautiful place called the burren. Tourists flock and seem to think it’s great to build a small cairn and take a photo. The place is littered with them and we do our best to take them down every winter. Although this is not the same in remote areas I totally understand Louis’ comments – I have climbed first assents (5) in Greenland and my climbing partner and I decided to leave nothing, no trace. Our planet is small enough, please no more bottles or notes. Leave nothing and take only photos and memories.
Adrian – this medium surely is the best method of meeting like minded people?

Traditionally, cairns were built to mark mountain trails, and sighting a cairn is still a godsend when you’re caught out in bad weather in the mountains of Norway.

Cairns on mountain summits are also a tradition on the Norwegian mainland, and prominent mountains often have tall and well built cairns that were erected more than a hundred years ago.

What ticks me, though, is when people buid cairns all over the place for their own amusement. A cairn is a marker, to mark a path, border or summit. Building cairns anywhere else has nothing to do with tradition nor history, and more to do with one’s own ego.

This is the Governor of Svalbard’s take on the issue:

“Cairns and other “messages”

You will find many cairns in the wilds of Svalbard. Some of these are memorials, while others are unwelcome traces left by recent visitors. You may feel tempted to leave your mark on a place, but please refrain from doing so. Instead, it would be helpful if you contribute to preserving the pristine aspect of the wilds, so that others, too, may enjoy its magnificence. “

I do not build cairns or make entries in their bottles. But that is because of a serious lazy streak; my certainty that like my dog, the best mark I can leave is my pee; and certain other anti-social tendencies. But I also think the idea that building a cairn robs the next person of some solitary experience is an illusion. I can sail to Nemo and the water, rain, and air will all carry man-sign. Credit to Øyvind, I make exceptions for areas already crawling with man-sign, in these areas non-trail marker cairn removal can be a way to better enjoy the experience and exercise those anti-social tendencies.

Honestly, in areas populated or traversed by poeple dependant on dwelling in nature, cairnbuilding is communication boosting security: Marking mountain routes or like here (Greenland) sailing routs, they help navigating in fog or snow or other critical conditions. Cairns built for fun or like territorial dogmarks risk to blur the message of the functional cairns. If you absolutely wish to leave a mark, make something else –

I have been lucky enough to visit some very remote spots on this planet and my most powerful and awe inspiring thoughts revolve around the dream that I might be the first to visit or see a place. I would suspect that almost all cruisers have felt this at some point in their travels. Now, I am not naive, and I understand that the blank spots on the map are all filled in. The odds of being the first to visit anywhere anymore are slim to none. If there is a chance though, I want to believe it, and if there is no obvious sign to the contrary, then it allows me to hang on to that sense of wonder and satisfy my sense of adventure. It’s that sense of adventure and exploration that has led me to spend all of my money and time seeking out the corners of the map, in hopes of finding one more amazing place. I hope those that come after me have no idea or proof that I was there, and I am grateful to those before me who left me that sense of wonder.

I don’t have to be the first, but leave me the dream.

This comment refers to the most remote and secluded places: we know them when we find them. Thank you for your amazing website, insight and all the great information found here.

That makes sense and thank you for the kind comment on the site.

Hi John,
What fun to run into your comments and the well-articulated arguments against recreational cairn making when bumping around the AAC site. This has been a pet peeve of mine for decades. My mentor for woodsmanship in the north woods of Michigan taught us that cairns were a substitute for blazes in trail marking when blazes were not possible. There were to be 3 (sometimes, but rarely, 4) rocks piled in a way that would have been unlikely to occur in nature and that would not be easy to topple. Fewer were better and best situated only where the trail turned. I suspect some might pass muster as monuments or other markers, but the vast majority are simply graffiti and should be treated as such. I have noticed some new signs the last few years in parks forbidding cairn building.
My best, Dick Stevenson, s/v Alchemy

Thanks for the kind words. We haven’t built a cairn since receiving the rocket from Louis.

In the National Parks of the UK – cairn building is now strongly discouraged as ‘environmental vandalism’ as you describe it. Growing up a hiker and in Scouts it was the norm – but as footfall increased it did no good at all to denude paths of rocks to build a cairn. Now, the national parks, ramblers association, scounts and pretty much everyone else says that you should not build cairns. At one time they served a function – both practical as well as cultural – but ended up causing harm so times need to change.

That degree of agreement is good enough for me!

Definitely works for me. Times change and so should we.