Anchoring In The Modern World 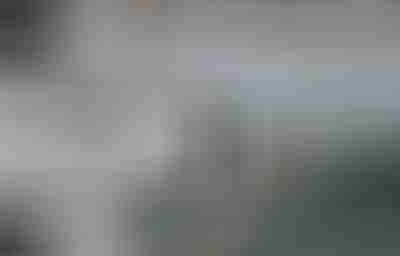 See this chapter for our latest thinking on the Rocna anchor, including a serious weakness.

The first sailors anchored using heavy stones, attached to long ropes, and often with an army of slaves to pull them up. Thank God those days are over, and that we now have excellent choices of anchors available, and powerful windlasses to retrieve them.

There can be few more important decisions to make than what ground tackle to choose when planning a long term cruise. We placed the highest priority on selecting the right gear for our new OVNI, knowing that we’ll have to rely on those decisions for most nights over the coming years.

The standard boat comes with a 1000W Lofrans’ windlass, which might be fine for most purposes, but not for a heavy anchor and plenty of chain we feel, so we’ve upgraded to a 1500W unit. We endured a fruitless chase to find some G70 high tensile chain in Britain, and in the end had to give up, but we did (finally) manage to track down some 10mm G40 chain calibrated for our windlass, so we’ve had to settle for that. The main cable will therefore have 70m of this chain, with another 30m of 18mm nylon anchorplait spliced to it. The second cable will have 30m of the chain with 100m of anchorplait, and a third with 10m of chain and 100m of anchorplait. This should provide ample capacity for most situations.

For our anchors, we have gone down a tried and tested route, at least for us. In 2005, fed up with our 45lb CQR and its variable performance we imported a 25kg Rocna from New Zealand. Having used it for two seasons in the Hebrides, anchoring on an almost daily basis, we found it to be a revelation in terms of speed of setting and holding power in a wide variety of substrates. So we’ve gone for a 33kg Rocna, backed up with a 25kg from the same manufacturer as our usual bower and kedge. Backing this up we have an FX-37 Fortress, which whilst less than perfect in some situations (hard sand, weed) is so easy to handle from a dinghy as to be almost indispensable.

For many owners the CQR has achieved near mythic status, and for many years I would have agreed it was the best anchor on the market, having spent hundreds of nights safely anchored by one. Having worked hard to perfect the technique to set one effectively, we felt we couldn’t make much improvement, but over time, the weaknesses—slow setting, poor holding in hard sand, easily choked by weed—became a real annoyance, and I became dubious about their ultimate holding power. So, although the Rocna was very costly (we imported it independently before there was an importer in the UK) we felt it would be worth the risk. Reports on the abilities of the “new” generation of anchors like the Spade and the Rocna were so positive we felt we had to try one for ourselves. And I have to say that the reports are true as far as we are concerned.

The Rocna is such a good all rounder that we’ve decided that for the first time, we’ll carry two anchors of the same type. We may also buy a big fisherman as an emergency hook, and for use in rock and kelp (where we would not normally choose to anchor), but that’s a straightforward trip to the local shipbreakers and little expense. Many people have commented that the new anchors are expensive, but when compared against what? Our new Rocna has cost us about the same as a month in a marina berth here, and we have it for use in perpetuity, so let’s keep things in perspective.

These anchors have their own drawbacks in some ways, though. There is a need to learn a new technique when setting them to allow for their rapid digging in to avoid strain on deck gear and the windlass. And while the large lateral area gives phenomenal holding, it does make it hard to carry two anchors in twin bow rollers—they are very huge. But as a wise man once remarked; “every time someone walks past our boat and laughs at the anchor, I reckon I’ve got it just about right”. And most bow rollers are still set up for the CQR or similar, so we’ve a list of planned modifications for ours to be carried out over the next few weeks to allow us to deploy and secure the Rocna effectively.

We believe that the new generation of anchors mark a major improvement in safety, security and offer priceless peace of mind. Human invention is limitless, and so things develop over time, so the conviction that anchor development stopped with the CQR simply flies in the face of reality. For if we followed that logic to its conclusion, we’d still be driving cars with cable brakes, flying the Atlantic in biplanes…and anchoring with stones.